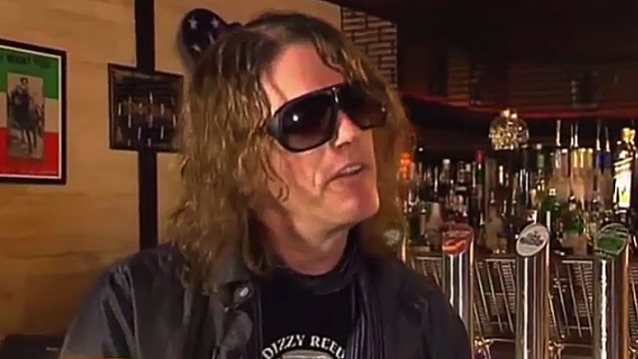 During a brand new interview with Metal Insider, GUNS N' ROSES keyboardist Dizzy Reed was asked how likely he thinks it is that fans will get to hear a new GN'R album or song in the foreseeable future. "I really hope that it happens this year and there's still a lot of time left, so let's just shoot for that," he replied. Pressed if he thinks GN'R will go back to the record-label model or will try a more do-it-yourself approach for its next release, Dizzy said: "I stay out of the business stuff, but if I were in charge, I would go with the do-it-yourself approach. To me, that just works better these days. Eliminate the middle man. That would work for me."

He continued: "As far as [how any new music from] GUNS N' ROSES [might get released], I can't say. I know there's so much more I just don't even know about, that I don't even want to know about, or need to know about. I'm sure that whoever is in charge of that will make the correct decision and whoever they decide to work with that the label or the labels, or whatever, I'm sure they will work hand in hand to make the best product possible for everybody."

Reed also commented on the recent list of "The World's Greatest Singers" which placed GUNS N' ROSES frontman Axl Rose in the top spot. The ConcertHotels.com chart ranked vocalists based on their vocal range and claimed Axl's recorded notes spanned nearly six octaves, from F1 (in the 2008 "Chinese Democracy" song "There Was a Time"), in the second-lowest octave in scientific pitch notation, to B flat 6 (in GN'R's cover of THE DEAD BOYS' "Ain't It Fun", which appeared on the group's 1994 covers album "The Spaghetti Incident?"), five octaves above it.

"I can't argue with that," Dizzy said when asked to comment on the list. "I've made similar comments before."

He added: "I think if everyone had a chance to really sit down and dissect what [Axl] has done over the years on certain songs and CDs, his voice is his instrument. It's mind-blowing, and yes, his range is incredible. I have mad respect for him as a singer, songwriter and as an artist and a friend. He's amazing."

Rose and Reed skipped GUNS N' ROSES' induction into the Rock And Roll Hall Of Fame in April 2012 and declined to be inducted along with the rest of the group. Original GN'R members Slash, Steven Adler and Duff McKagan, along with later members Matt Sorum and Gilby Clarke, performed three songs at the induction ceremony in Cleveland. They were joined on vocals by Myles Kennedy, who sings in Slash's solo band.

Asked what it was like being inducted into the Rock And Roll Hall Of Fame, Dizzy told Metal Insider: "I never knew who was behind all of that or what it's all about, what the criteria is and the achievements are to get to that point. With that said, when the people called me and said that I was going to be part of the whole thing, obviously I was very humbled. I know who, at that point, had been inducted, and just to be mentioned in the same sentence was very flattering. If they were going to induct GUNS N' ROSES into the Hall Of Fame, they were trying to figure out who was going to be at the ceremony, and basically most of the guys in the band now weren't invited. To me, that was just kind of not cool. Bottom line is Axl wasn't going to go and there's no way in hell I was going to go either."