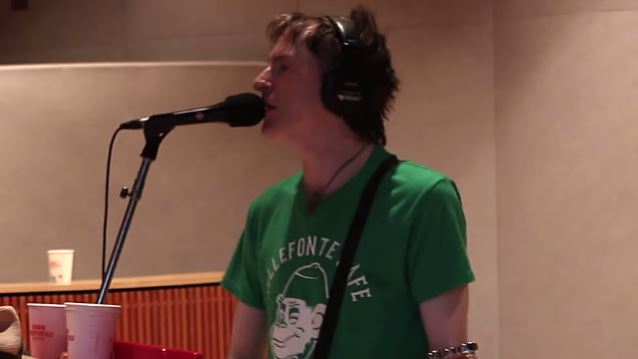 Longtime GUNS N' ROSES bassist Tommy Stinson, who has been with the band since 1998, has told The Current that he doesn't know the Axl Rose-fronted group's status at the moment.

Stinson, a founding member of the seminal Minneapolis-based rock group THE REPLACEMENTS, last played with GUNS N' ROSES at a June 2014 show in Las Vegas. "The back story on that, I don't really want to talk about on air. 'Cause what happened with it, it has nothing to do with Axl or any of that stuff; it had more to do with my personal situation," he said. "Basically, I played my last gig in Las Vegas with them and had to come home and tend to that the best I could while REPLACEMENTS [reunion shows] were kinda being offered up. And I, you know, I sort of… I don't know. I think that… My guess is...that, at some point, someone's gonna call me and tell me what's up with that. 'Cause we all left… We've left on friendly terms— it wasn't like a bad thing. But another guitar player, DJ Ashba, I think he 'officially' quit to do something but, you know, I just… I had to walk away and take care of my stuff so. Taking care of my stuff; whatever my stuff is."

Recent rumors are pointing to a possible reunion of GUNS N' ROSES' classic 1987 lineup, which would mean Duff McKagan taking over bass duties, along with Steven Adler, Izzy Stradlin and Slash rejoining the ranks. The rumors are centered around Slash's recent revelation that he and Rose had repaired their estranged relationship after nearly 20 years,

Asked about the reports of a possible classic GN'R reunion, Stinson told The Current: "I'll be perfectly honest with you, man. I hope they do because, you know, when you go back to where you started from and just check that out, and feel that for a moment after you've gone on and done all these other things, you know, there's a reward that comes with that, and I had that with the 'MATS [short for PLACEMATS, which itself is a nickname for THE REPLACEMENTS] stuff... It's a good thing; it's a good thing to do once in a while. And I hope it works out for 'em — if it actually happens."

The rumor got started when the owner of Cherry Bar in Melbourne appeared on Triple M radio Down Under and said sources had told him that the original lineup would play the Soundwave festival next year.

The fest's promoter, AJ Maddah, told Music Feeds, "It's been nice for me personally to share this fantasy for a few days along with the fans, but it is not happening."

Maddah added, "If a reunion does happen, it is going to take longer than six months for the band to be ready to tour. I think it'll take a hundred lawyers six months just to get the five of them into a rehearsal room together."