Guitarist Steve Smyth (FORBIDDEN, THE ESSENESS PROJECT, NEVERMORE, TESTAMENT, DRAGONLORD, VICIOUS RUMORS) will attend this year's NAMM (National Association Of Music Merchants), which is being held January 15-18 at the Anaheim Convention Center in Anaheim, California. His schedule is as follows:

Smyth will be performing a brief compilation of his solos from the 2005 NEVERMORE disc he was part of, "This Godless Endeavor". He will also be joined by THE ESSENESS PROJECT bandmate Steve Hoffman to play songs from their debut instrumental album, with Smyth demonstrating Randall's MTS Series head and cabinets.

Says Smyth, "I am pleased to be making a return trip to this year's winter NAMM! Steve Hoffman, the other 'Ess,' and I will be performing material from THE ESSENESS PROJECT debut at this year's NAMM. We'll be performing at the NAMM Randall amplifier booth on Friday, and one more time on Saturday with. I am very pleased to announce in my search for great tone, I have arrived at the door of Randall amps, and could not be happier with the MTS series head. A very versatile amp, and great heavy tones, this amp has it all, and does it all! I'll also be over at the B.C. Rich booth, checking out the new B.C.'s coming out this year, and discussing a very killer surprise coming to you in 2009. Looking forward to the show!" 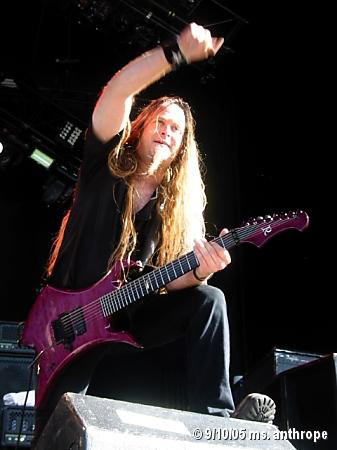