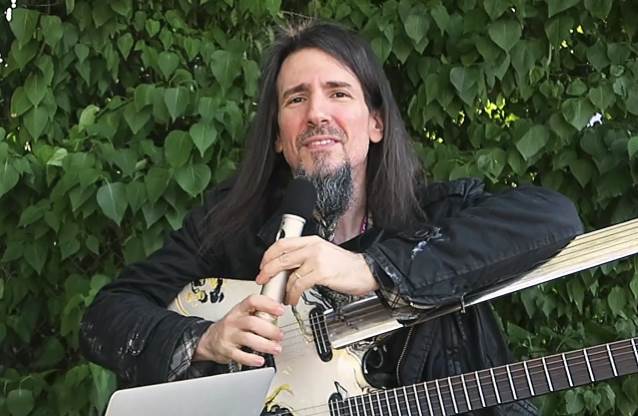 Former GUNS N' ROSES and current SONS OF APOLLO guitarist Ron "Bumblefoot" Thal was interviewed by Metal Casino earlier this month at the Swedish festival Helgeå. The full conversation can be seen below. A few excerpts follow (as transcribed by BLABBERMOUTH.NET).

Bumblefoot: "It was 2004, and Joe Satriani shot me an e-mail. He said, 'I recommended you to GUNS, just so you know. It's not fake if someone reaches out — it's not something weird.' [Former keyboardist] Chris Pitman reached out a few hours later and sent this funny e-mail — something like, 'Eighties Hair Band Looking For Guitar Player,' something funny like that."

On whether he prefers being a solo artist or playing with a band:

Bumblefoot: "As long as it's something real, something where everybody has a real relationship, and everybody's creative, and it's not some fabricated thing where you're just a utility. That, I'm not into. I've tried that; it's not me. For a lot of people, it is, and God bless 'em — they do it well. But for me, I need to be in something that's what I imagined the band thing [to be] when I heard KISS when I was five years old and said, 'That's what I want to do.' I don't compromise — that's what I do, and that's all I'll do. I'll be in bands that have real relationships with each other — good relationships where we write together, where we hang out, where it's everything a band is supposed to be. That's what I have now with SONS OF APOLLO. So, what do I prefer more? I've love doing the solo thing — I've been doing it all my life. I've put out twenty-something years of music since the early '90s, a lot of albums, and with that, I get to fully give all of myself — the writing, bass, guitar, singing, vocals, the engineering, the mastering, everything. I really get to give as much of myself as I possibly can, and that feels good. That's what you want to do as a musician — you want to give as much of yourself as possible. With a band, though, it's more than you could ever be if it's just you. I could give 100 percent of myself, but once I'm collaborating with someone, they're adding things I could never do, and never think of. They're adding a flavor to the mix that one person alone cannot have and does not have. It's nice to have both, because a band can't be everything for everybody, but a band is more than you could ever be by yourself, so when you have both, life is good."

On SONS OF APOLLO:

Bumblefoot: "There's baggage with the term supergroup, because for one thing, people might think it's this sort of corporate, fabricated thing that isn't legit. That's not the case with this. We're old friends; we've all played together. Me, Mike [Portnoy] and Billy [Sheehan] have played so many times together, jamming; I've recorded with Billy; I've toured with Mike; we've done METAL ALLEGIANCE. So many jams, so many things. We have a background. We know each other and we've played together and we've toured together and we've recorded together and we've done things together, and just beyond the music part, we know each other. It feels like a real band. It's just that everyone had to get their planets to align for us all to get into the same place at the same time and get that ball rolling... No one had to prove a damn thing to each other. We all know who we are and what we do, and we have a relationship. It's just like, 'Hey, let's just make some music.' We didn't even really think about it — we didn't say, 'Hey, it should be this style or that style; it should sound like this or has to be this.' None of that — we're just going to do what we do together, and when you put it all together, it's going to sound like what it sounds like."

On whether the group plans to work in a similar manner in the future: