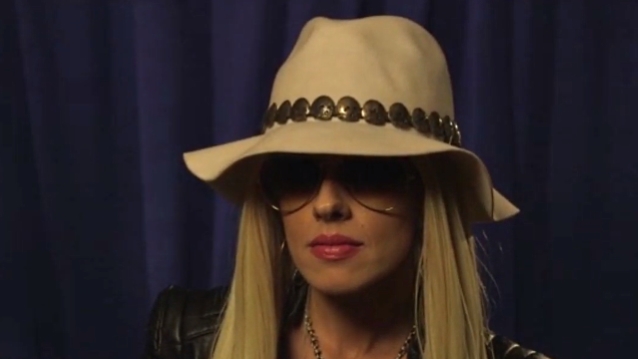 At the 2019 NAMM Show — a convention for the musical products industry that took place in Anaheim, California from January 24-27 — guitarist Orianthi (ALICE COOPER, RSO, Michael Jackson) spoke with Australian Musician. The full conversation can be seen below. A few excerpts follow (as transcribed by BLABBERMOUTH.NET).

On opening for Steve Vai in Australia at the age of 14:

Orianthi: "That was pretty daunting, getting up there, being a 14-year-old playing with a backing track in front of all these guys with their arms folded like, 'What the hell are you going to do?' It was super weird and awkward, but Steve was watching me, and I had a blast. Just feeling the energy... When you're up on stage, especially being a female guitar player in a male-dominated field, if they just see you're into it and it's your passion and you're just giving it your all — it's not, like, an accessory — then it's all cool. Steve was a huge supporter and has mentored me."

On collaborating with Vai on her 2009 song "Highly Strung":

Orianthi: "That was super cool. I think I was flying with Steve and I was, like, 'Let's do a song together.' He's like, 'Okay. Come over to my place next week and we'll write something.' I came over and he had this idea for the riff, and he's, like, 'We should just go back and forth'... Those guitars you hear on that song are actually the demo guitars that we recorded straight off the bat. We wanted to keep that sort of vibe. I think when you try to recreate it — which we did — it sounded weird because we weren't in the room together. I think we spent a small fortune on re-recording it in different studios, and it just didn't sound sonically right. I think sometimes when you're in the room, you're capturing that vibe, even if they're demo parts."

Orianthi: "That was crazy. I had this demo, and my manager at the time sent it to his manager, or something. He's, like, 'Come backstage and let's jam.' I think I was, like, 17 or 18 then. I went backstage and jammed with Carlos, and I was nervous as hell. He was so cool — he was just, like, 'I'll play your guitar. You play mine. Let's just jam for an hour.' Then he said, 'Okay, you're joining me onstage tonight.' Forty-five minutes [later], I was up on stage with him playing in front of, like, 15,000 people, but I knew every song, because I was obsessed with 'Sacred Fire' videos, and obsessed with pretty much all his records — 'Abraxas', all of that. 'Europa' was actually the song that hit me the most, just with the melody, the tone, the heart in his playing. Carlos is one of those soulful players. He can hit one note like B.B. King, and it speaks really deep. He's been a huge influence and a good friend, too."

On touring with ALICE COOPER:

Orianthi: "That was awesome. I played the 'American Idol' finale with Alice and I did some work with [producer] Bob Ezrin. Alice called me one day and he's, like, 'My guitar player just left for THIN LIZZY.' I was in Nashville finishing up my 'Heaven In This Hell' album, and I got the call. He's like, 'Can you learn 27 songs in a week?' ALICE COOPER songs are not, like, three chords, so I literally shut myself away for a week and didn't speak to anybody. It was so much fun... celebrating Halloween every night, dodging swords and Frankenstein and giant pythons. It was awesome."

On performing at the Grammy Awards with Carrie Underwood:

Orianthi: "I think I had a mild anxiety attack beforehand, because I was walking by and I saw B.B. King in the green room. I sat with him for a minute, and that was crazy. As I was walking up the steps, Bono, The Edge, Paul McCartney, everyone's walking by you, and you're like, 'Oh my god — this is actually happening'... That was so much fun, though. It was really cool of her to invite me."

On her new music:

Orianthi: "The first [new] single is 'Love Bomb'. It's kind of urban/rock/pop — dark sort of pop. I had [the] 'Believe' record, which was really commercial, so this is just experimenting with beats [and] working with different producers that are into that. I just like to experiment. I think you should always grow with the times and do your own thing with what's happening now, and this is incorporating the guitar with the urban beats and the pop choruses. I'm really proud of it and can't wait for people to hear it and see what they think."

On whether she's aware of her status as a role model for aspiring female guitarists:

Orianthi: "Of course. It's awesome now, because when I first came here to NAMM, there was not that many female guitar players. Now, there's so many. I think they did a study, and 50 percent of guitars are bought by women — something like that. It's kind of equal now, and it's awesome."

The first single from Orianthi's upcoming album, "Love Bomb", is expected to arrive soon. The track was produced by Paul Dawson, who has previously worked with Rihanna, Ariana Grande, P Diddy, Justin Bieber, Jay Z and many more.

Orianthi continues to work with top-level artists while maintaining a successful solo career.