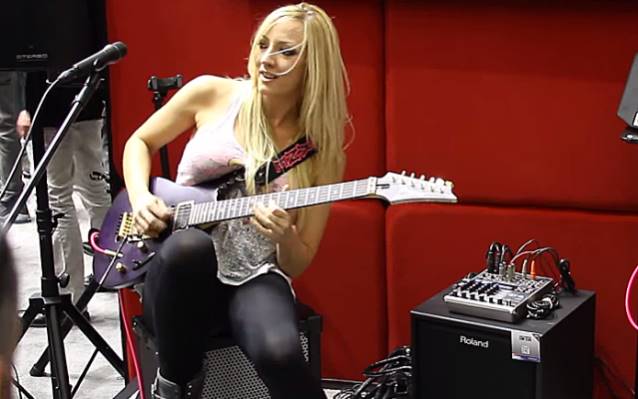 Guitarist Nita Strauss, who recently joined the ALICE COOPER band as the replacement for Orianthi, says that she is "honored and excited" to have been chosen to tour with the legendary rocker.

Strauss, a longtime Ibanez signature series endorsee who made her name with THE IRON MAIDENS, FEMME FATALE and LA Kiss, will hit the road with the rest of Cooper's band — guitarists Ryan Roxie and Tommy Henriksen, plus bassist Chuck Garric and drummer Glen Sobel — this summer.

Strauss also spoke about Cooper's upcoming road trek, which will see Alice's band supporting MÖTLEY CRÜE on the latter act's "The Final Tour". "For the tour, we'll be doing 72 cities beginning with a few warmup shows in Michigan and then joining up with the CRÜE on July 2," she said. "We have a little break in September and then go back out until mid-November."