Commented Glen: "Back in October of 2008, I felt it better to remove myself from the business part of the band with the hopes I could go forward playing live shows and giving the fans what they want, I wanted to put the 'Evil' back in FORBIDDEN.

"I had a lot of fun seeing the smiling faces as they sang the words to 'Eyes Of Glass' and 'Chalice Of Blood', but could no longer take all the accusations and distrust that came with our so-called chemistry.

"I'm looking forward to the release of my new band TENET's CD release. This is the heaviness that I was seeking from a band. Not to say that the new FORBIDDEN CD will not be good, just not heavy enough for my taste buds. How could it get any heavier than the line up of Jed Simon [STRAPPING YOUNG LAD], Zetro Souza [EXODUS], Gene Hoglan [STRAPPING YOUNG LAD, DARK ANGEL, TESTAMENT], Byron Stroud [STRAPPING YOUNG LAD, FEAR FACTORY] and myself?

"I would like to say good luck to all the FORBIDDEN guys and their new guitarist Steve Smyth. Let's hear another 'Forbidden Evil' or 'Twisted Into Form' CD."

FORBIDDEN was rejoined by drummer Paul Bostaph (TESTAMENT, SLAYER, EXODUS) for a couple of songs during the band September 12 Slim's concert in San Francisco. It was the first time in over 15 years that the all-original FORBIDDEN EVIL (pre-FORBIDDEN) lineup played together.

Professionally filmed video footage of FORBIDDEN's June 28, 2008 performance at the Graspop Metal Meeting in Dessel, Belgium can be viewed below (clip uploaded by YouTube user "Sebastos1"). 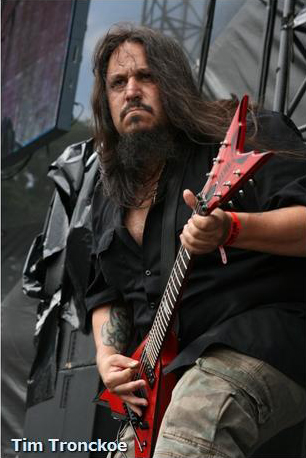