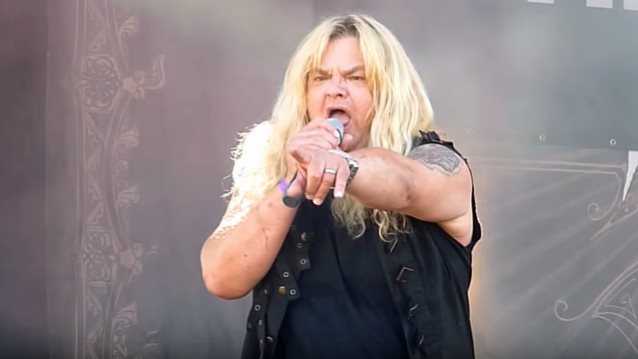 Vocalist Steve Grimmett of STEVE GRIMMETT'S GRIM REAPER, the revamped version of the cult '80s British metal act GRIM REAPER, had part of his right leg amputated after an aggressive infection spread from his toes to his knee.

As BLABBERMOUTH.NET first reported yesterday, the singer had been at an increased risk of infection in his limb since was he taken ill at Saturday night's (Janaury 14) STEVE GRIMMETT'S GRIM REAPER concert in Guayaquil, Ecuador.

According to Grimmett's wife Millie, Steve performed most of the gig sitting down. "After the show, Steve was taken to hospital where he had an operation to remove an infection from his foot and bones," she said. Unfortunately, the operation didn't work and Steve underwent another surgery a short time later to have his limb amputated to save his life.

Millie wrote: "Yesterday Steve had his right leg removed from below the knee. The infection was so aggressive it spread from his toes to his knee overnight. I've briefly spoken to him and he sounds in high spirits, laughing and joking. Hopefully he will start his journey home next week."

As a result of Steve's ordeal, the remainder of STEVE GRIMMETT'S GRIM REAPER's South American tour has been canceled.

Grimmett reformed GRIM REAPER in 2006 as STEVE GRIMMETT'S GRIM REAPER following an amicable decision between the singer and original GRIM REAPER guitarist Nick Bowcott, who both agreed that using the original name minus the other members of the classic lineup wouldn't be a proper reunion. Joined by Ian Nash (guitar), Paul White (drums) and Martin Trail (bass), Grimmett's version of GRIM REAPER released its debut album, "Walking In The Shadows", last September via Dissonance Productions.

Asked by Illinois Entertainer how he would like GRIM REAPER to be remembered years from now, Grimmett said: "Touring is the hardest job I've ever done, and I've been in construction and the like. But I love it, because I get to get out there and meet the people that are buying your material and the people that love to see you live. And they are the people I look after. Every show we do, we always come out and sign stuff and take pictures with the fans. We always do a meet-and-greet afterward. Because as I said, these guys are the reason why we do it and the reason that we can do it. So, I'd really like to be remembered for the fact that we took care of our fans."