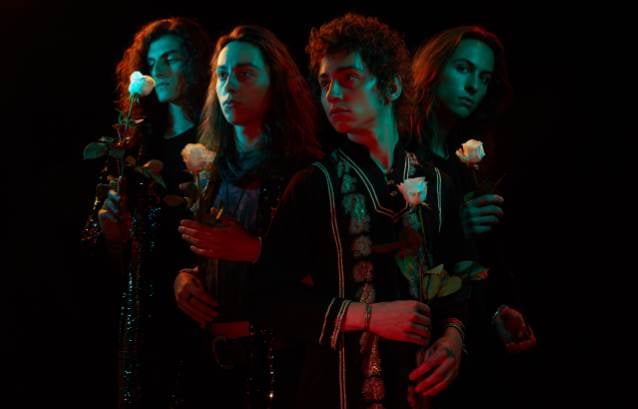 GRETA VAN FLEET guitarist Jake Kiszka spoke to the DOMKcast about the progress of the recording sessions for the band's full-length debut, tentatively due before the end of the year.

Asked how the making of the new disc was different to the way GRETA VAN FLEET recorded its first two EPs, "Black Smoke Rising" and "From The Fires", Jake said (hear audio below): "It has some commonalities, but as far as [how] those two things differ, we had the ability to sit down with all the material that have written and go, 'Okay, now we have the ability to put something together that is a complete thought.' Whereas EPs are just kind of concepts — just short pieces — where now we have something that is one full complete thought.

GRETA VAN FLEET performed its new single, "When The Curtain Falls", on the July 26 episode of "The Tonight Show Starring Jimmy Fallon".

The band played in Michigan clubs for six years before rocketing to the top of the rock radio charts last year with "Highway Tune". The track is taken from the "Black Smoke Rising" EP.

GRETA VAN FLEET canceled its appearance at the Panorama festival in New York last weekend due to an injury sustained by drummer Danny Wagner two weeks ago.