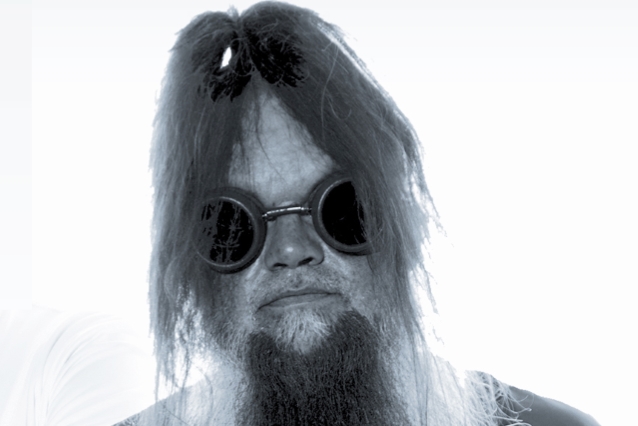 Greg Tribbett says that fans who are calling for a MUDVAYNE reunion "just need a little more patience."

It's been just under a decade since MUDVAYNE released its self-titled fifth album and little has been heard about the group during that time.

The guitarist, who co-founded MUDVAYNE in 1996, told "Jon's Untitled Podcast" that he and his bandmates appreciate the fact that there are thousands of fans out there who are still interested in the group's music. "We don't take it for granted," he said (hear audio below). "We're all flattered that everybody still wants MUDVAYNE to tour and do a new record and come out and do all that stuff. The thing is is that everybody is in three different bands and kind of doing their own projects, and there's no time for that right now."

Tribbett continued: "People just need a little more patience, I know 10 years is a long time, but… They say the same thing about SYSTEM OF A DOWN — they haven't put a record out in 12 years and the fans are begging for them.

"I think it's the individuals in the band; it's just priorities, you know?" he said.

Tribbett's current focus is AUDIOTOPSY, which will release its second full-length album, "The Real Now", on November 2 via Megaforce Records. He is joined in that band by MUDVAYNE drummer Matt McDonough, SKRAPE vocalist Billy Keeton and bassist Perry Stern.

Asked if he thinks AUDIOTOPSY is being unfairly compared to MUDVAYNE, Greg replied: "Absolutely. Chad [Gray, MUDVAYNE vocalist] is not the singer of this fucking band, and I wish people would figure that out. That's what I hear [from] all the haters: blah blah blah, 'Oh, it's not Chad, [so] it fucking sucks. I don't give a fuck about it.' I'm, like, dude, this is a whole different band, a whole different vibe, a whole different sound. It's not meant to be MUDVAYNE or sound like MUDVAYNE, just because there's two other members from MUDVAYNE in it. Like I said, people have no patience for anything. I know everyone's begging for a MUDVAYNE reunion, and have been for almost 10 years now. And that's all I've been hearing."

Gray, who has been a member of HELLYEAH for more than a decade, has expressed skepticism about the possibility of a MUDVAYNE reunion, noting in a 2015 interview that "the only way I personally would want to do MUDVAYNE is if everybody licked their wounds and got over it."

Asked in Revolver magazine if Greg's exit from HELLYEAH hit him especially hard, seeing as the two of them started off playing together in MUDVAYNE, Chad said: "Yeah, man. He has always been my right-hand man. He's been the back I look at when I'm writing songs and the sounding board for my ideas. When everything went sideways, it was like losing a great friend. I was filled with fear and I had mixed emotions. At first, I was like, Goddamn, I don't know if I'm ever gonna be able to do this without him."