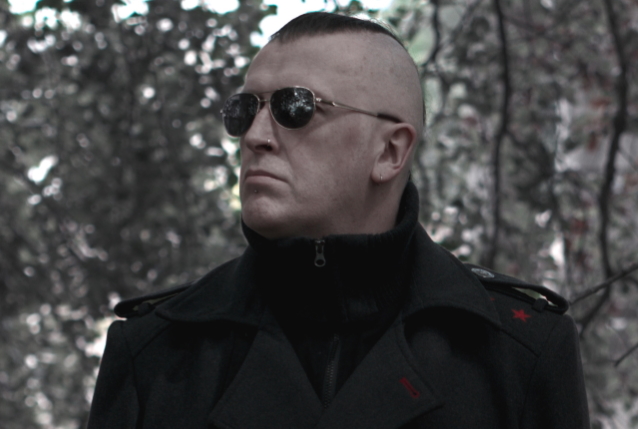 Josh Rundquist of That Drummer Guy recently conducted an interview with guitarist Greg Mackintosh of British gothic doom metal pioneers PARADISE LOST. You can listen to the entire chat below. A few excerpts follow (transcribed by BLABBERMOUTH.NET).

Greg: "When I finished with [my previous side project] VALLENFYRE, I still had that itch to scratch. I enjoyed being back in the underground extreme music scene, so I knew I wanted to do something else, but I didn't want it to be just a continuation of VALLENFYRE. So, yeah, I kind of thought about other things that have influenced me throughout my life; some of that early industrial and black metal was a big influence on me when I first started out. GODFLESH was one of the first bands I had played live with supporting them. A lot of the early BATHORY stuff as well. Yeah, it was nice to be able to incorporate that in and experiment in a way. As far as the album goes, there's a lot of different types of stuff on there. There's one-minute grindcore songs and seven-minute doom songs and everything in between. I think we tried to tie it all together. Our brief to each other was that we wanted to have this feeling of foreboding or dread running through the album. That's kind of how I tried to tie it together."

On creating STRIGOI's sound for their debut album, "Abandon All Faith":

Greg: "That did take a little bit of time to do. I think the two things that tied together most of all are probably the dissonance in a lot of the guitar melodies that run throughout the album. Also, I think [engineer] Kurt Ballou [CONVERGE] has done a great job of mixing it. You can't take that away. It sounds like the band is in the room with you. That gels it together really well."

On the production for "Abandon All Faith":

Greg: "This is the first record that I've actually recorded from start to finish pretty much, and produced. I've been building my own studio [Black Planet] with a live room and a control room for the last few years. I got it finished about a year ago, so this was the first thing I did in there. It was kind of like myself and Chris were almost recording it as we were writing, so we knew exactly what we were doing with it and what kind of sound we were going for. So, I guess it didn't take much time together for Kurt in the end. But we got these nice, organic sounds and I don't know…it just worked. It's the first time we've done it and it's also the first time I've had the lyrics then written the music to the lyrics. I asked Chris to do the lyrics on this record. We discussed the songs at length beforehand and then he would come back with some lyrics for the songs, then I would interpret them. I wanted to do it that way because I wanted to get a feel for what the song is about and how it was going to play out. If it was going to be an extremely angry song about something, you want to portray that well. So, yeah, it was a couple of elements to this record that I've never actually done in this way before."

On the "Abandon All Faith" album title:

Greg: "I've been an atheist from quite a young age. But the older I get, the more militant my atheism becomes, because the more angry I get about it. You would have thought it would dissipate with age, but it's actually getting worse. I don't understand why we're in this position with it. In what should be kind of almost an age of enlightenment, scientifically speaking, anyway. Religion is the most divisive thing on this planet, whether you like it or not. Even within each religion, it hates each other. They hate each other within the religion as well. There's Sunni and Shite Muslims killing each other. There's Protestants and Catholics killing each other. It's so divisive. I can't believe that in the time we're in leaks into politics and ethics and people's lives the way it does. Even something like faith schools is a bizarre concept. It's dividing children and sorting them into different things when they're a young age. There's no such thing as a Muslim kid or a Catholic kid. They are just kids. I just want to pull the whole thing down but I'm not going to be able to do it through music so I just complain about it."

On the punk influence found within STRIGOI's sound:

Greg: "It's a measured thing. It's trying to find that balance between being chaotic and having a certain measured response there. I think with VALLENFYRE, it possibly was a bit more chaotic than this. This is a little more structured, but that's the balance to find. Also, it's worth mentioning that songs have to have hooks, regardless of whether it's a one-minute grindcore song. You listen to NAPALM DEATH's first record [1987's 'Scum'], it's full of hooks, even though it's so chaotic and rudimentary. It's still got lots of hooks and a lot of the early death metal stuff. I think that's kind of been forgotten about over the last couple of decades. When you're doing extreme music, you still got to have a hook there, otherwise, there's nothing to remember, there's nothing to get your teeth into."

On the style of PARADISE LOST's next studio album, which they recently started recording with producer Jaime Gomez Arellano:

Greg: "There's a couple of songs in the new stuff that kind of pick up where [2017's] 'Medusa' left off, but, for the most part, it's a lot more varied. It's hard to pigeonhole, but a couple of songs, I would say, are almost '80s goth music. There's a lot of stuff in between and a lot of quite eclectic stuff on there. It's going to be quite a varied album, I think."

"Abandon All Faith" was released November 22 via Nuclear Blast.

PARADISE LOST's next studio album is tentatively due in the spring of 2020.