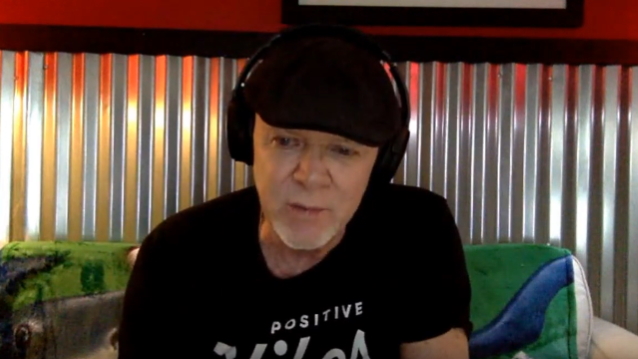 GREAT WHITE guitarist Mark Kendall says that he doesn't know if he will ever perform again with the band's original lead singer, Jack Russell.

Russell exited GREAT WHITE in December 2011 after he was unable to tour with the group due a series of injuries, including a perforated bowel and a shattered pelvis. Jack largely blamed these injuries on his alcohol and painkiller addictions as well as the prednisone drug he was prescribed.

In a new chat with SIN CITY REJECTS' Jason Green, Kendall stated about Russell: "If I saw him somewhere, I wouldn't run away or anything. I don't think we would get in a fight. There's never been any mean intentions or bad thoughts or anything like that. Obviously, going through the court thing was a complete nightmare. I mean, it was just horrible."

Pressed about whether he thinks he will ever share the stage with Jack again, Mark said: "God, man. That's a tough question. I don't know that that would ever come up. I'm not sure.

"My only concern is his health and stuff like that," he added. "We were friends long enough to where, just put the music away, forget the music. Let's talk about how you're doing, how you're holding up, buddy. So, as far as the music goes, I don't even care about that."

Russell sued his onetime bandmates in 2012 over their continued use of the GREAT WHITE name after Jack had taken a leave of absence from the band for medical reasons. A short time later, Russell was countersued by Kendall, rhythm guitarist/keyboardist Michael Lardie and drummer Audie Desbrow, claiming the vocalist's self-destructive behavior was damaging the GREAT WHITE name (they also alleged he was charging promoters less for his own touring version of GREAT WHITE). The parties settled in July 2013 without going to trial, with Russell now performing as JACK RUSSELL'S GREAT WHITE while the others are continuing as GREAT WHITE.

Nearly three years ago, GREAT WHITE announced the addition of new singer Mitch Malloy to the group's ranks. He replaced Terry Ilous, who was fired from the band in July 2018.

Last month, Russell told "Rocking With Jam Man" that his split with GREAT WHITE "was very emotional. It still hurts a lot," he said. "Maybe it's like a divorce, 'cause you get to be brothers when you're playing in a band together, especially for many, many years. And then when that ends, it can be very traumatic on your spirit. That's what it was like when I split up with my old guys. That was really, really difficult. But what are you gonna do? You've gotta kind of go with the flow and just move on."