VH1 Classic's Rock Autism Celebrity Bowl-Off took over Lucky Strike Lanes in Hollywood on Thursday, November 13 as rock stars, actors, and athletes alike put on their bowling shoes in support of autism awareness. The evening benefitted three autism organizations and raised funds which will be donated to the charities: hollyrod4kids, ACT Today!, and The Doug Flutie, Jr. Foundation for Autism.

GREAT WHITE pulled out all of the stops in the tough bowling competition and came out on top as the tournament winners. The rockers were awarded with trophies and VH1 bowling shirts.

As classic rock blared through the speakers and VH1 Classic videos streamed on screens through the bowling alley, celebrities and Bowl-Off attendees browsed a silent auction table overflowing with rare rock and roll and sports memorabilia. In addition to the silent auction, a few items were auctioned live including an autographed JANE'S ADDICTION guitar, a USC football helmet signed by seven Heisman Trophy winners, and a signed 2008 Lakers team jersey.

VH1 Classic's Rock Autism campaign is designed to help educate parents and build awareness about autism and to raise funds for a variety of autism research, advocacy and support organizations. 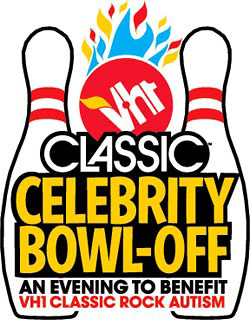