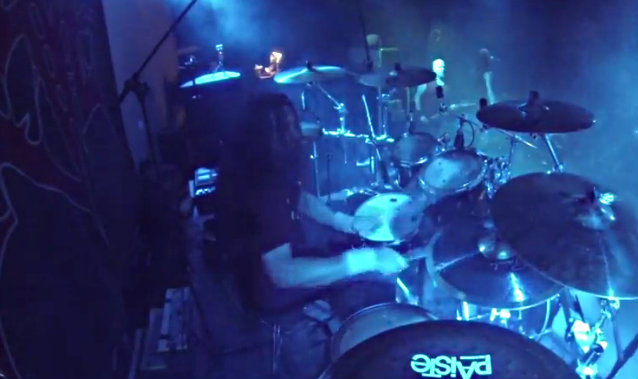 Drummers From Hell has uploaded drum-cam footage of GRAVE's Ronnie Bergerstål performing the song "Turning Black" when the band played in Warsaw, Poland at the Progresja Club on December 21, 2013 during their European tour with MARDUK. Check out the clip below.

GRAVE's latest five-song EP, "Morbid Ascent", was released as a limited 12-inch MLP (with full-color, 180-gram vinyl and full-color inlay) as well as digital download. Both formats will be offered for a fan-friendly price. The digital download was made available August 26, 2013.

"Morbid Ascent" includes two brand new tracks, a cover version of SATYRICON's "Possessed", a remix version of "Epos", as well as the newly recorded version of "Reality Of Life", a classic GRAVE demo track from the "Sexual Mutilation" demo (1989). The EP's opening track, "Venial Sin", features some shrieking guest solos by AUTOPSY's Eric Cutler. The cover artwork as well as additional interior artwork and the entire layout was once again created by Costin Chioreanu, who has worked on covers for the last three GRAVE albums as well as artwork for numerous other artists and bands (DARKTHRONE, DESTROYER 666, ULVER).

"Endless Procession Of Souls" was recorded at GRAVE's own Studio Soulless and was previously described by GRAVE guitarist/vocalist Ola Lindgren as "a mix of our latest two releases with some more old-school, groovy 'Soulless' parts."

GRAVE in 2011 parted ways with its guitarist of three years, Magnus Martinsson.

GRAVE's current lineup is as follows: