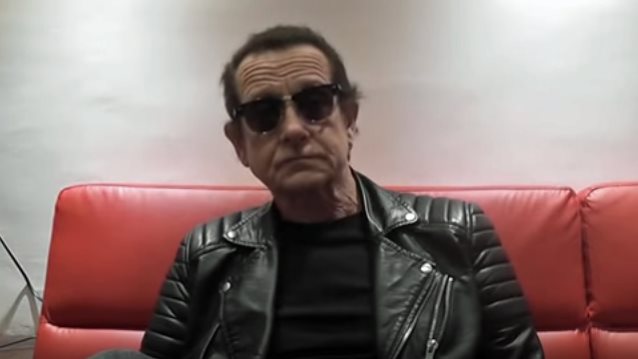 Asked if it's true that he recorded his vocals on the classic RAINBOW song "I Surrender" before quitting the band in 1980, Bonnet said: "I started to record it, yeah. I did some backing vocals and quit after the backing vocals were done, because we had nothing else. And I looked at Roger Glover [RAINBOW bassist and producer], and I said, 'What else are you gonna do? I've done backing vocals. What else have you got?' 'We have nothing.' So I went back to L.A. And then they called me up a little bit later to say, 'We've got some more songs now.' I said, 'What's the point of me coming back now?' I said, 'I've decided to do something different.' [And they said] 'Well, look, if we get another singer in to do some of the songs you don't wanna do, we'll get somebody else to do those and you do what you wanna do, the songs you like.' And I said, 'No. That won't work — two singers.' So I just quit, believe it or not. What an idiot… I'm kicking myself now, because I should have stayed a bit longer. And I apologized for that to the band."

Pressed on whether he regrets leaving RAINBOW, Bonnet said: "Yeah, absolutely. 'Cause I was probably a bit too… My ego was taking me somewhere else. I was a bit too cocky. But in the end, it worked out okay."