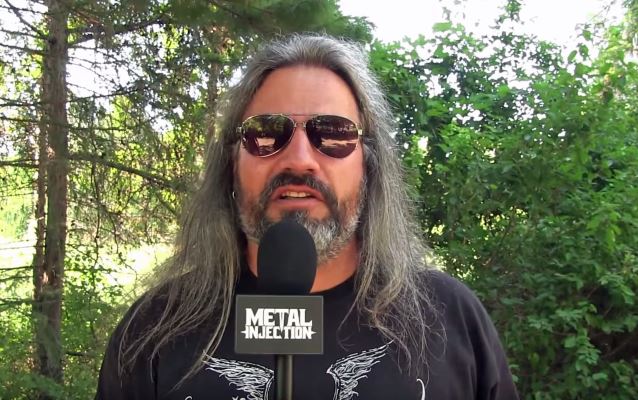 Canadian technical death metallers GORGUTS are putting the finishing touches on the songwriting process for the follow-up to 2013's "Colored Sands", tentatively due in early 2016. Speaking to Metal Injection at this month's Heavy Montreal festival in Montreal, Quebec, GORGUTS guitarist/vocalist Luc Lemay stated about the upcoming CD (see video below): "[Bassist] Colin [Marston] and [guitarist] Kevin [Hufnagel], when they come over [to Quebec to rehearse] for gigs, we like to spend more days working on [new] material. But the new record, beside lyrics, everything is written. The music is finished — let's say, 98 percent [is done]. We're into the minor-detail phase, which we stop every two seconds [and go], 'Oh, minor detail. What about this and this and this?'"

He continued: "The new record, it's gonna be a single track… one long song. I've been wanting to do that for a long, long, long time. After hearing PORCUPINE TREE's 'The Incident', MESHUGGAH's 'I', the DEATHSPELL OMEGA EPs, I said, 'I really wanna get into this compositional exercise,' you know — to get one big movement. And I think it's pretty cool. I can't wait to share it with the crowd, and that's gonna be a lot of fun to play live."