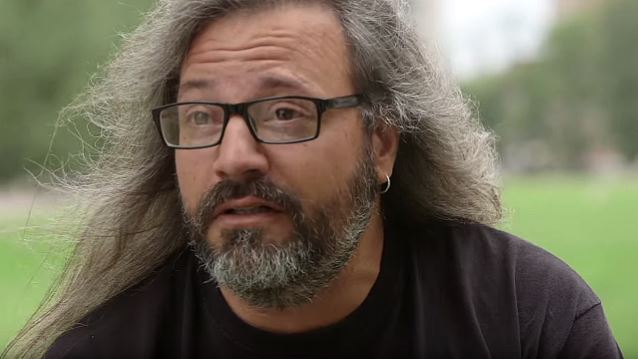 Guitarist/vocalist Luc Lemay of Canadian technical death metallers GORGUTS is featured in the new episode of BangerTV's "Sam Dunn's Metal Journeys". In the four-minute segment below, Luc talks about growing up a metalhead in the province of Quebec.

GORGUTS will embark on a European tour in March with PSYCROPTIC, DYSRHYTHMIA and NERO DI MARTE.

"Sam Dunn's Metal Journeys" follows documentary filmmaker Sam Dunn as he travels the world exploring the global metal community. It continues the mission Banger Films began with its 2008 feature documentary "Global Metal": to examine what metal means in different cultures by meeting with the musicians and other passionate metalheads who've devoted their lives to this music. Upcoming episodes will take you to a metal themed restaurant in Gothenburg, Sweden; the working man's club in Sheffield, U.K. where DEF LEPPARD got its start; David Coverdale's Lake Tahoe home in Nevada; North America's biggest metal festival in Montreal, Canada; and a special three-part series documenting the growing local scene in Johannesburg, South Africa.

GORGUTS is working on the follow-up to 2013's "Colored Sands", tentatively due later in the year. Speaking to Metal Injection, Luc stated about the upcoming CD: "The new record, it's gonna be a single track… one long song. I've been wanting to do that for a long, long, long time. After hearing PORCUPINE TREE's 'The Incident', MESHUGGAH's 'I', the DEATHSPELL OMEGA EPs, I said, 'I really wanna get into this compositional exercise,' you know — to get one big movement. And I think it's pretty cool. I can't wait to share it with the crowd, and that's gonna be a lot of fun to play live."

GORGUTS in 2014 parted ways with drummer John Longstreth and replaced him with Patrice Hamelin.