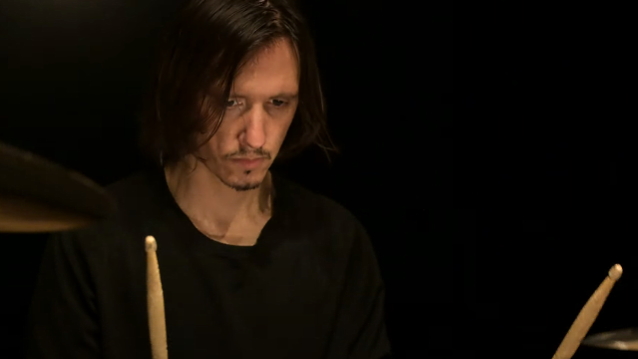 GOJIRA drummer Mario Duplantier has released a video for his latest drum solo "Cyclone". The clip, which was directed by Anne Deguehegny, can be seen below.

In a recent interview with the "Behind The Vinyl" podcast, GOJIRA frontman Joseph Duplantier was asked if he ever has arguments with Mario, who is also his brother. He responded: "Sometimes, but we're pretty patient. We have anger. I wouldn't say we have anger issues, but sometimes I wonder. We respect and love each other very much. We're aware that we're dealing with a project that is very life-defining for us, and there's a lot of people around us. So we're pretty patient. Sometimes I can feel and I can tell — and he would say the same — that sometimes we just can't stand each other. For a little bit — for, like, an hour or two hours. And then we'll be, like, 'You know what? I'm outta here.' We will not start screaming, for example, if something is not happening. Maybe once a year or twice a year we'll raise our voice on each other and it's pretty nasty, but it's very short. So, yeah, we're not punching each other in the face or anything like that."

Joseph also talked about the musical chemistry and connection between him and Mario, saying: "Sometimes he starts just playing something and I'll follow him directly. And then something grows. Or we'll stop and say, 'Hey, I have this vision of something. It goes a bit like this.' And then we start… We build together. It's pretty incredible. I actually never really experienced that with anybody — making art together without being, like, 'Oh my God. What is he doing? That's not what I wanna do.' There's always a connection in something. And I'm very comfortable on the creative process, 'cause I know we're looking for the same thing — sort of. He has his world, I have my own world, of course — we're not the same… But sometimes we get together, and the common area is what defines what the band is, pretty much. So when we're in that zone, where we connect, and there's this thing where we're both… And we know — we just look at each other; we raise an eyebrow or something, and, boom. We don't need to talk. We just play, play, play."

Last month, GOJIRA announced details of a fall U.S. headline tour. The new dates, which will feature special guests KNOCKED LOOSE and ALIEN WEAPONRY, are set to kick of October 11 in Salt Lake City, Utah at The Union and continue through a performance at Cleveland, Ohio's The Agora on October 29.

The new headline dates will follow GOJIRA's summer run supporting DEFTONES which gets underway August 12 at The Armory in Minneapolis, Minnesota and includes two GOJIRA-only headline dates on September 3 in Chattanooga, Tennessee and September 20 in Boise, Idaho.

GOJIRA's new album, "Fortitude", was released on April 30 via Roadrunner Records. The disc was recorded and produced by Joseph Duplantier at Silver Cord Studio — GOJIRA's Ridgewood, Queens, headquarters — and mixed by Andy Wallace (NIRVANA, RAGE AGAINST THE MACHINE).