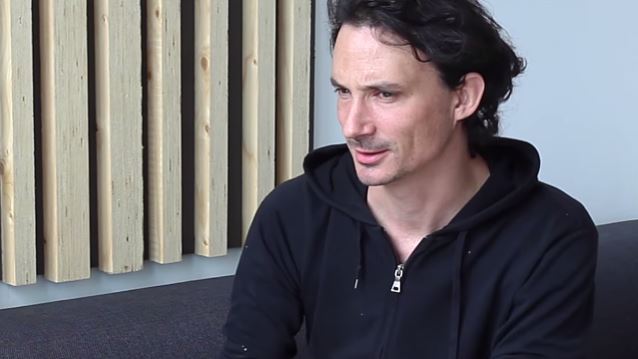 Therés Stephansdotter Björk of RockSverige.se conducted an interview with guitarist/vocalist Joseph Duplantier of French progressive metallers GOJIRA before the band's appearance at the Copenhell festival, which was held June 18-20 in Copenhagen, Denmark. You can now watch the chat below.

Asked if his wild onstage persona is "another side" of him that he doesn't get to show in his everyday life, Duplantier said: "I don't know if it's another side… Maybe it is… Maybe it is another side of me; it's possible. I can't be a wild beast in my everyday conversations. You know what I mean?! It wouldn't be possible; it doesn't work like that. And, also, I'm impressed by people in general. Right now I'm nervous and I'm sweaty. I feel uncomfortable in social situations, and I have to work at this — being with others and functioning in this society. On stage, there's no such thing. You can be just like a pure explosion of energy; you can express all your frustrations and stuff, so it's… It's also a great way to get rid of all the things that are bad for you. When you scream, you have a space to express that frustration, anger that most people can't really express at work. And then you go back and [spend time] with your families. There's no really a space or a moment where they can explode like that. So we have that in our lives. So then, we just… Also, technically, when you're going to perform on stage, you can't really get too excited during the day and [be] angry… You have to keep all that for the show."

Joseph previously told RockSverige.se that fans can expect to see the next GOJIRA album sometime in early 2016. He explained: "We were [originally] aiming [to release it in] October this year, but we had to push the recording. I think the difficulty was… Mario [Duplantier, drums] brought a lot of ideas on the table… very challenging drum patterns. It's less complicated than before. It's more… I wanna say it's more straight to the point. That's what we were doing since we started. We're getting rid of layers and complicated things, just to keep the core of the idea. There's always an idea behind a song, and sometimes it gets too crowded. So we're trying to keep the core of each idea. So the energy that Mario has, it's a big signature for our band, GOJIRA — the drum patterns and the double-kick stuff. And I have my own impulse. So it's mainly Mario and me composing… I think the fans know that. And one of the biggest difficulties is to come together on these songs and to create something that, okay, we both feel like, 'This is it. This is the song.' It took a while to get there. Sometimes, on previous albums, Mario wouldn't be totally satisfied — like three [or] four songs — and for me, I [would be] like, 'Eh, this song is just like a drum solo with guitars on it.' And this time, I think we really found something — a balance. [It's] very powerful and exciting. We're very excited about the new record."