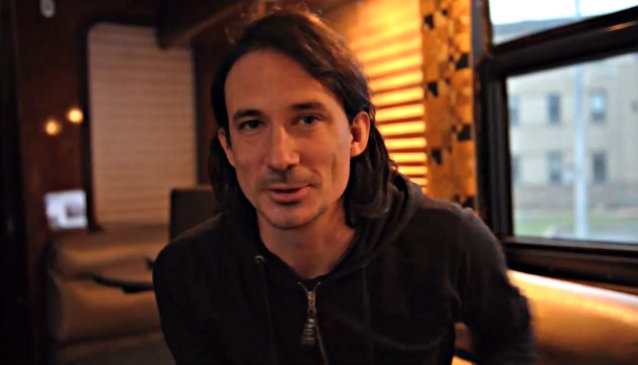 In a brand new interview with Performer.com, guitarist/vocalist Joseph Duplantier of French progressive metallers GOJIRA revealed that the band has begun writing material for its next album, tentatively due in 2014. Many of the creative sessions so far have taken place on the tour bus, a phenomenon that Joe admitted is rather new for them.

"I actually hate it," he said. "I mean, I love it when there's an idea and it works and it sounds like there are things happening, but it's really weird to sit in the middle of all these shoes — because everybody throws their shoes in the back lounge, and dirty socks — and a computer, and [drummer/brother Mario Duplantier's drum] pad…

"We're not a rock band anymore, you know? It's like being in a cage, a stinky cage with a computer. It's not the same. I need to be in a room with my friends and jam, so I cannot wait to get to that stage."

He continued: "It's mostly riffs and ideas that we record. We have a list of riffs, but we don't have, really, a song. Well, we have two songs that [we think], Okay, there's a structure here and there are enough ideas to make something. Some of the stuff is really exciting, but the conditions are really difficult, and when the bus is driving…"