Marking the release of GOJIRA's new album "The Way Of All Flesh", vocalist/guitarist Joe Duplantier speaks in the new issue of Zero Tolerance magazine about his hopes and fears for the future of the planet. "I feel... terrified and very sad about what's happening on earth right now," he says. "I feel deeply — and I'm not the only one, a lot of people and everyone in the band agrees — I really mean it, it's not to be trendy or whatever, because it's true. We are destroying a lot of things, we are killing endangered species — we are killing sharks, we are killing whales and that's an aberration to me. I cannot help it, when I get in the practice room and we play this music that is so powerful and stuff, I start screaming about it, I cannot help it. We truly feel concerned and we hope that if the band gets bigger we can do more concrete things, raise money for a cause — we already give money to Greenpeace, but that's a personal thing. We try to do our best not to waste water or gas or electricity, we try to be more conscious of what's happening on earth. We are concerned, that's a fact. Even if the main message of the band is more about the soul or the mysteries of life in general or what happens in the afterlife or our inner fears — to know ourselves better — that's the message of the band. But we are citizens of earth, so we have to talk about that in our songs. I don't want to sound clichéd, but we have to protect what we have. It's more than important, it's crucial."

Of the new album, Duplantier says that expectations to surpass 2005's "From Mars To Sirius" came from within, rather than outside, the band. "The pressure from outside the band is not as big as this pressure that we already have spontaneously or naturally. We're very happy to be on the cover of magazines and to have good reviews, it's very rewarding. But we don't pay too much attention to it — we have been a band since 1996, it's a long time, 12 years, that we're a 'new' band! People still think that we're a new band, but we worked a lot and toured a lot in bad conditions and didn't get paid for years and years, so being on the cover of a magazine is nothing compared to how hard it is to stay strong as a band and as human beings, to stay together all the time and overcome the tensions inside a band. So when there is a cover or something it's more like joy and something very positive, not pressure."

GOJIRA leads the way in issue 025 of Zero Tolerance magazine which examines the relationship between extreme music and ecological/environmental concerns. Joining the discussion are ENSLAVED, THE TRIPLE TREE, KAMPFAR, GREEN ARMY FRACTION and more. Elsewhere, CYNIC talks about its decision to create a successor to its near-legendary album "Focus", while AMON AMARTH, Albert Witchfinder, David E Williams, WARNING, BLOODBATH, BENEDICTION, LORD BELIAL, HORNA and many others all join the action.

Issue 025 also marks the fourth anniversary of Zero Tolerance magazine. It comes in at an extended 148 pages, each issue accompanied by a free double CD.

Since its inception in 2004, Zero Tolerance has set the agenda for extreme music, representing the sonically unacceptable without compromise, exposing the darkest, most obscure recesses of the musical imagination and celebrating its diversity. 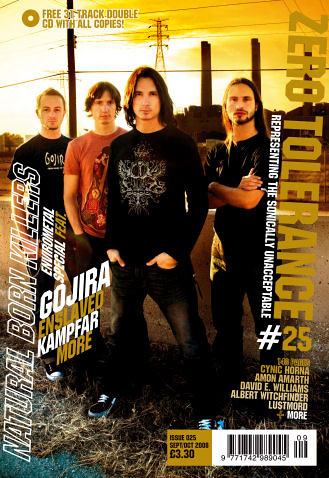