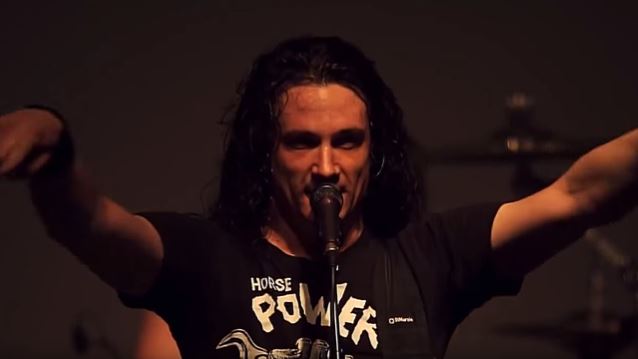 Guitarist/vocalist Joseph Duplantier of French progressive metallers GOJIRA spoke to Ireland's Overdrive about the progress of the recording sessions for the band's follow-up to 2012's "L'Enfant Sauvage" album. He said: "Usually we compose a bunch of songs — like 15 songs — and then it's, like, 'Okay, we have 15 songs.' You know what I mean? Usually, we're very happy with the songs we have right away and we treat them like kids. It's like when you have a baby and you take care of that baby; you don't think twice — it's just an immediate reflex to protect and nurture. Now it's, like, 'Wait a second. We need our strongest album now. We need something really perfect.' First, we started to act like before and we had these songs and were, like, 'Okay, it is what is it. Maybe it's not the greatest of all time.' Then we really thought about it, and now we're like, 'No, it has to be the greatest GOJIRA album of all time.' So we got rid of all the songs that were not absolutely mindblowing and came up with more songs. It sounds really pretentious to say it's the greatest album of all time, but, to us, it is."

Joseph also talked about the songwriting process for the new GOJIRA CD. He said: "Whenever we get together to work on a new song, or we feel it's time to come up with a new record, we get together and we jam like we never jammed before, almost kind of like we're not a band and just a bunch of friends having fun and experimenting. We try to come up with something totally different and approach GOJIRA from a completely different angle. It's very important for us all to really enjoy ourselves during this process, as that's the reason why we do it. Sometimes we come up with riffs that are so far away from death [or] extreme metal, or anything we did before, and that's what catches our attention. Most of the time when we are writing and experimenting with sounds and melodies, we will hit a nerve, and it's like, 'Oh! this is cool. It's new and different. Let's keep pushing the boundaries,' and that is really what gets us excited. For us, the music really needs to be exciting and not necessarily different, but needs to get that feeling that we have created something fresh and new, something that has evolved from the 'traditional' GOJIRA sound, that we are all very comfortable and excited to be playing now. It's a very natural process for us all, and what came out of these sessions for the new album was something really straight to the point and felt just right for us."

According to Joseph, not having to meet record company deadlines during the making of the new GOJIRA album has given him and his bandmates an opportunities to revisit the material and refine it to make it better. He said: "I think it's very important to give some space during this period of making the album. Having the luxury of being able to listen to the songs with new ears and a fresh new perspective really helps us understand what we are creating and helps to identify problems, like if a composition is too long, or if there is something missing from this song. This has happened with some of the songs on the new album to date, which has been a great exercise for us, and, fortunately, has worked tremendously in our favor, as we have developed the songs to a much higher standard, which is exactly what we are looking to do."

He continued: "We understand that we have to let the new material breathe. For example, we were thinking, 'Okay, this song is way too long,' or 'There is definitely something missing on this song,' and sometimes we even make a complete turnaround decision about including some material for the album, because it just might not be good enough, or happens to be not right for the overall feel of the album."

Joseph added: "Another way we approached the recording of the record is that every song needs to be super exciting, especially when it's our sixth or seventh album. We don't want to make something and be, like, 'Oh, this is what I did, and we're not really that happy with it.' We still have to decide what is really worth being on this record. That is so important to us and taking some distance helps this process."

GOJIRA's new album is tentatively due in early 2016 via Roadrunner.