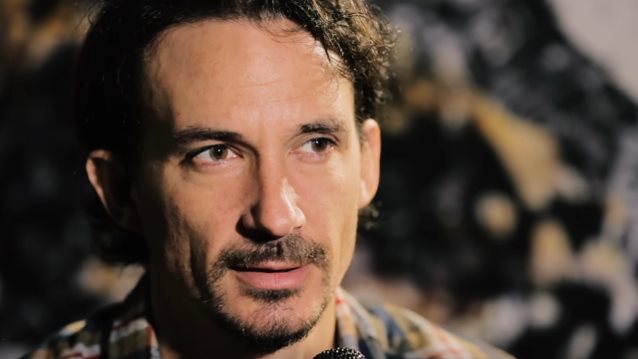 Exclaim!'s Aggressive Tendencies recently conducted an interview with vocalist/guitarist Joseph Duplantier of French progressive metallers GOJIRA. You can now watch the chat in four parts below. A couple of excerpts follow (transcribed by BLABBERMOUTH.NET).

Duplantier: "Yesterday at the show, a fan told me, 'Can I tell you something? I really love your band, but a lot of people think that you went mainstream.' And I wasn't sure what that meant, really, to this kind. Did he mean, 'You're trying to make money, and you betrayed your fans,' or, 'The music that you do organically is closer to a mainstream vibe.' But I told him, 'I'm sorry for your friends that they're losing us like that, but we're just being ourselves and doing our thing, and it happens to attract more people, which is good… for us.'"

On his vocal evolution:

Duplantier: "For the last ten years, I feel there's something growing in me. That's way when we did 'The Way Of All Flesh' [2008] three albums ago, I tried some things with the vocals that were going in that direction and then gave up on that — aborted it. I'm, like, 'No, it feels weird.' But still I wanted to try, and it was interesting to try it. So I was kind of doing researches, you know, with my vocals and GOJIRA's music. And then on the album after that album, 'L'Enfant Sauvage' [2012], there was a few things there… there was the song 'Born In Winter' where I sing, but it's not something that I can redo live, because it's such a low note, and it's very quiet too, so it's a bit challenging to amplify that kind of song. And then on 'Magma' [2016], it was time for me to really embrace that. 'Cause I needed that. If I didn't start singing, I would probably quit doing what I do, 'cause it wouldn't be interesting anymore. So it was kind of vital for me to start doing something new with my vocals."

"I still like to scream. Sometimes there's a song, and I'm, like, 'I'm gonna sing on that.' It's, like, this amazing melody. And then I think about all our fans: 'They're gonna be so disappointed.' And then I'm, like, 'No, don't think about them. Just think about what you're doing here and try to be honest with yourself.' And then I go for it, and very surprising things happen. But sometimes I just start screaming my ass off in a different way than before too — it's more high-pitched or whatever — and that's interesting too. So I really honestly don't know what's gonna happen on the next record. We'll see."

Duplantier: "We want to create songs that are heavy, that are violent in a certain way without being really violent, but more powerful. Somehow we are obsessed by recreating the storm or the heaviness of a mountain or a wave crashing with sound; it's kind of what we wanna do. Artistically, we have that fantasy, that thing, that quest, almost. It's funny. We wanna create something powerful and mean. But with the years, we're taking off layers of, 'Oh, we wanna sound like that band, but we don't wanna be that band. But we don't wanna…' Wait a second! Just play the music that we wanna hear, and that's what's happening today.

"We don't have rules. We don't wanna belong to a certain genre or a certain musical community. We just wanna be ourselves as much as possible and have fun and create something that we think is powerful. And it doesn't necessarily mean keep doing what you were doing when you were 16. Or, 'You've gotta sound like DEATH or MORBID ANGEL.' We're just trying to be ourselves. The only rule that we have is to not betray ourselves, and I think we're doing that."

Duplantier: "It's exactly like a friendship. You have a friend when you're a kid, and it's a friend that matters for life. You will always remember that friend, you still love that friend, but you moved to another city with your parents, so you don't see that friend anymore, but it's still part of your story, your structure, and without that friend you wouldn't be the same person. We still love death metal — it's part of us — and we don't feel like we turned our back on what we were. It's just part of our life was filled with death metal and that was our excitement at the time, and then we discovered new things and then we changed and then we grew up. Some elements are still there, but, yeah, the music changed with us, and that's the beauty of doing this. Being a musician, it's like you're exploring."

On fans not always being receptive to musical and stylistic changes:

Duplantier: "I never really quite understand why it's such a big deal to people when singers start to sing or when bands do different things. I can't understand it. All these conversations and discussions and questions, I'm, like, 'What's the big deal?' We're rock bands. That's what we do. We do whatever the fuck we want, and people write about it, like, 'Oh my God! They did that! And they never did before!' And, for me, the essence of being in a rock band is to explore and do unexpected things and to be mean or to be super-sensitive or to be this or to be that, you know what I mean? But just be who you are. It's cool if people don't get it or are mad, but it's just such a great feeling to be able to interact with the world in this way. It's great."

GOJIRA will join forces with Swedish progressive metallers OPETH for a run of U.S. dates in May.