French titans GOJIRA have announced their eagerly awaited return to Europe with an extensive tour in early 2022.

The new dates, which will be split into two legs, feature special guests ALIEN WEAPONRY and EMPLOYED TO SERVE. The first leg kicks off January 17 in Finland and closes in France on February 9, with the second leg picking up in The Netherlands on February 20 and wrapping in the U.K. on March 14.

GOJIRA's new album, "Fortitude", entered Billboard's Top Albums chart at No. 1, while also claiming the No. 1 spot on Billboard's Top Current Albums, Current Rock Albums and Current Hard Music Albums tallies. The release also marked a career high debut on the Billboard 200 for GOJIRA, arriving at No. 12, with several career-high chart positions and Top 10 debuts in countries around the globe including: France (No. 2), United Kingdom (No. 6), Australia (No. 3), Germany (No. 8), Belgium (No. 2), Netherlands (No. 4), Denmark (No. 3), Portugal (No. 4), Finland (No. 2) and Norway (No. 10).

This fall, GOJIRA will set out on U.S. headline tour in support of "Fortitude" which will feature special guests KNOCKED LOOSE and ALIEN WEAPONRY. The recently announced dates are set to kick of October 11 in Salt Lake City, Utah at The Union and continue through a performance at Cleveland, Ohio's The Agora on October 29. The new headline dates will follow GOJIRA's summer run supporting DEFTONES which gets underway August 12 at The Armory in Minneapolis, Minnesota and includes two GOJIRA only headline dates on September 3 in Chattanooga, Tennessee and September 20 in Boise, Idaho.

"Fortitude" is highlighted by the singles "Another World", "Born For One Thing", "Into The Storm", "Amazonia" and, most recently, "The Chant", a slow-burning track featuring some of GOJIRA's most melodic material to date. Just last week the band shared an official music video for "The Chant", which was written/conceived by the band's own Joseph Duplantier and directed by Russell Brownley. Filmed on location in India's West Bengal region in December of 2019, the cinematic video examines the plight of refugee children from Tibet who fled their homeland in an attempt to preserve their culture following China's invasion of the country in 1949.

Furthermore, GOJIRA recently concluded a month-long fundraising initiative in support of the indigenous-owned NGO The Articulation of Indigenous Peoples of Brazil (APIB) who advocate for environmental and cultural rights of indigenous tribes in the Amazon. Working with the social good-focused digital platform Propeller, the charitable campaign raised over $300,000 through an auction and raffle of one-of-a-kind items from the band and their friends in METALLICA, TOOL, SLIPKNOT, SLAYER, Slash and more. All proceeds will be donated to APIB to support their work aiding the indigenous tribes of the Amazon who have suffered immensely — victims of deforestation, land loss, forced labor, violence, and harassment.

Recorded and produced by Joseph Duplantier at Silver Cord Studio — GOJIRA's Ridgewood, Queens, New York headquarters — and mixed by Andy Wallace (NIRVANA, RAGE AGAINST THE MACHINE), "Fortitude" is GOJIRA's first album in five years and the follow-up to 2016's Grammy-nominated LP "Magma". A collection of songs urging humanity to imagine a new world and then make it happen, "Fortitude" has been earning widespread critical praise with Rolling Stone naming it one of their best albums of April 2021 and remarking "It's all the rage of death metal mixed with the conscience of punk rock and the musicality of progressive rock." NPR hailed "Another World" as "an apocalyptic banger," and Paste called "Into The Storm" a "much-needed revolutionary anthem." Stereogum declared, "hearing this band operating at their peak is a life-affirming thing," while Revolver attested "Fortitude" "could spark a revolution." 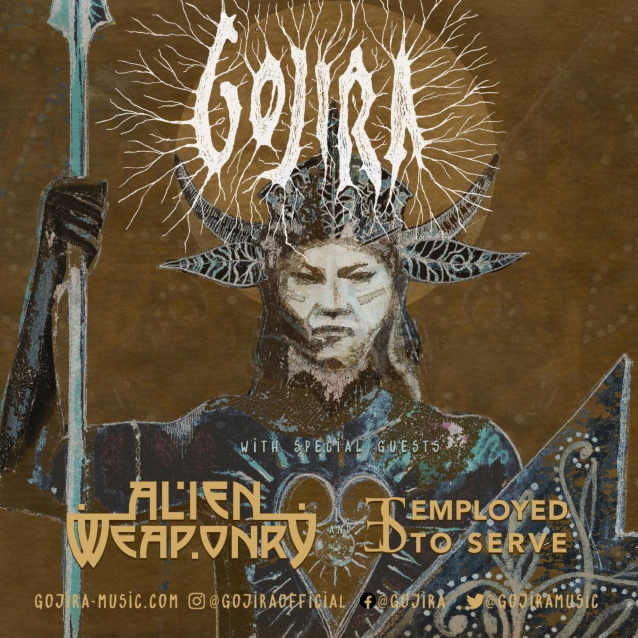