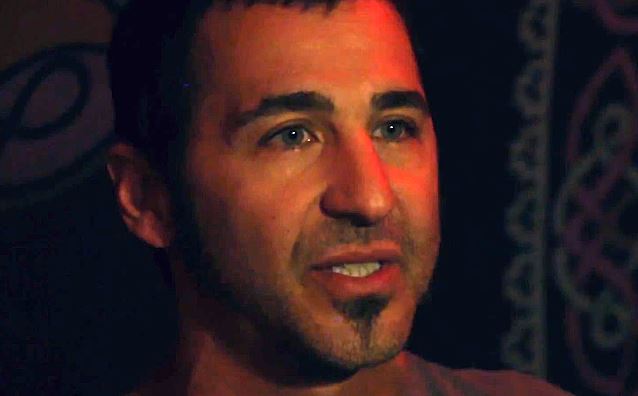 On May 8, GODSMACK frontman Sully Erna was interviewed by Mike Hsu of the Worcester/Boston, Massachusetts radio station WAAF. You can now watch the chat in three parts below.

Speaking about GODSMACK's new single, "What's Next?", which will include a military campaign to accompany the song's release, Erna said: "As everybody knows who's in bands and releasing singles, as you get deeper into the album cycle, it's a little trickier to keep the love on the album, to keep people interested, to keep the momentum going. And 'What's Next?', actually, was neck and neck to be the first single that we released. It was between that and [the title track] '1000hp', because we felt really strongly about both. But, of course, we went with '1000hp', 'cause it was more about the history of the band and we wanted to bring it back to Boston and the roots. So that being said, we knew 'Something Different' would always be our second single, and 'What's Next?' now was the obvious choice to release as the final single on the record."

He continued: "When I started thinking about the whole concept of bringing it back to the roots, part of our history was doing a lot of campaigns with the U.S. military — back on the 'Awake' record, when they were using that as the recruit commercial for six years straight. And I started thinking, the words to this, the lyrics are about, like, 'Nothing in life is certain except for life and death, but what's next?' And I started thinking this may be the song to kind of raise awareness for not only homeless vets, but post-traumatic syndrome that these guys suffer from when they come home from war and it affects their families and things like that. And it just so happens that the Red Sox teamed up with an organization called Home Base, and that's exactly what they're doing; they're bringing all these doctors around to do these seminars and they're training other doctors to give them the proper medical attention on how to cure this properly rather than having these guys feel like there's no place to go and being embarrassed about it, or whatever it is… feeling exposed. It's a really, really great charity that they got involved with. So we decided to take this song and kind of use it as a platform to team up with anything that we can do to help out with the women and men of the U.S. armed forces."

Elaborating on GODSMACK's plans to team up with the U.S. military on the "What's Next?" single release, Erna said: "We're still kind of rallying thoughts on how we're gonna actually execute this. I know one of the things is we wanna take proceeds from the tickets that we sell at shows and put it towards the charity and try to come up with as many ways as possible to be able to raise not only awareness but actual funds to help these causes. Because there's so many different components, for me, when it comes to the military; whether it's these homeless vets that are just sitting there going, like… When I think about it, I go, 'You were a soldier once that represented the United States of America, that fought for our freedom, that would put your life on the line, and you're just sitting there and not getting any help.' And it's, like… That's one of those things that really kind of bothers me."