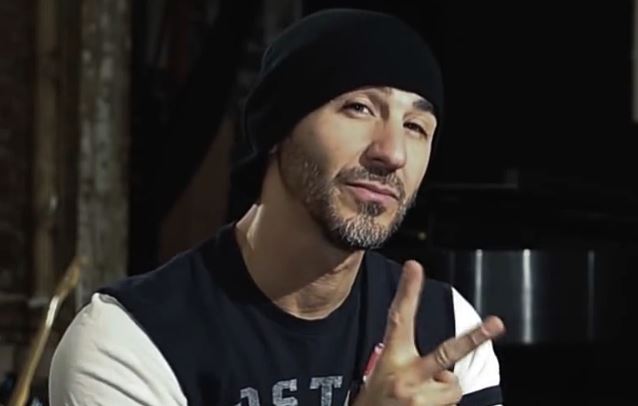 GODSMACK singer Sully Erna, who has been pursuing an acting career over the past few years, recently that he's going to start shooting his next movie early next year. A Thunderclap crowdfunding page for the film, titled "Black Files", has been launched, featuring a teaser and synopsis, which reads as follows: "The family of the U.S. Ambassador in an East-European country is slaughtered. The world's media attention is now pointed at Sofia, Bulgaria. Top CIA agent is assigned to find out who is responsible for the assault. He recruits a local rookie cop and they dig deeper into world of corruption, terrorism and international crime. The deeper they go, the more they realize that the truth is hidden behind 'non-existing' powerful organization, named Black Files."

Erna recently told The Pulse Of Radio about the movie: "There's a company that approached me. They're really, really great filmmakers, and they're gonna be doing this really cool film and shooting it in Bulgaria. And it's a movie about terrorism and international organized crime and stuff like that. It's based on, you know, Russian KGB and, you know, all that whole kind of vibe. Really really cool — kind of like a darker 'Mission: Impossible'-style movie."

Erna and Marilyn Manson earlier in the year both landed roles in a new movie called "Street Level", with Erna also contributing music to the soundtrack. The film is expected out on Christmas Day and the writer, producer and director is David Labrava, best known for playing Happy on "Sons Of Anarchy".

GODSMACK last week released a new song called "Inside Yourself" as a free download at the band's official web site.