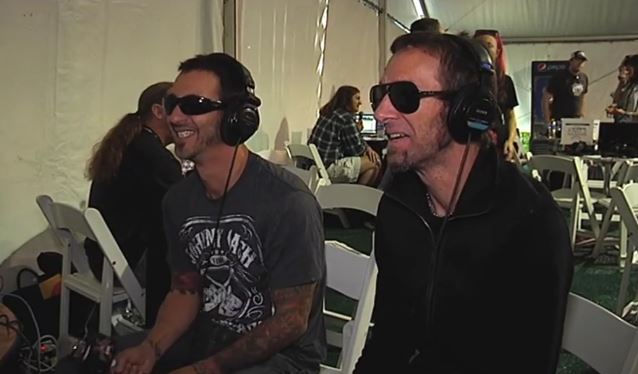 Nic and Big J of the Boise, Idaho radio station 100.3 The X Rocks conducted an interview with GODSMACK frontman Sully Erna and drummer Shannon Larkin at this year's Rock On The Range, which is being held May 15-17 at MAPFRE Stadium (formerly Crew Stadium) in Columbus. You can now watch the chat below.

Asked how everything is going for GODSMACK at the moment, Sully responded: "Things are really good, I must admit. The tour has been great, the [other] guys [in the band] have been great, the fans have been great, the shows have been great. Everything has been really good. It's been… It's been a really fun tour. I battled a few bummer things along the way, but the spirits have been up, so we fought right through 'em. I just weird things happen to me. I was in the gym, and I was probably in some of the best shape I've ever been in — running five, six miles a day, training, getting ready for the show — and nine days before the tour starts, I blow my back out. So I'm in rehab and getting cortisone shots in my spine, and I'm like… So, whatever… I'm, like, suck it up, I do my PT [physical therapy], I get ready, the first show goes great. Then we catch this chest virus, cold thing that lasted for two weeks for me. And it was just like one thing after another… Despite all that stuff for me that was going on, I just kind of fought through it and stayed in good spirits, so it's been a good tour."

As previously reported, GODSMACK abruptly ended its May 12 concert in Montclair, New Jersey before the encore due to Erna falling ill. The band released a statement, saying, "Just prior to the encore, Sully came off stage experiencing a shortness of breath and dizziness. Out of an abundance of caution, it was decided to have him be further evaluated by medical personnel off site and end the performance prior to the completion of the encore."

Sully apologized to the GODSMACK fans in New Jersey the next day, writing on Twitter: "Montclair NJ! Sorry. I'm ok. Been battling a virus and got dizzy and short breathed at the end of the show. But all is good and u rocked!"