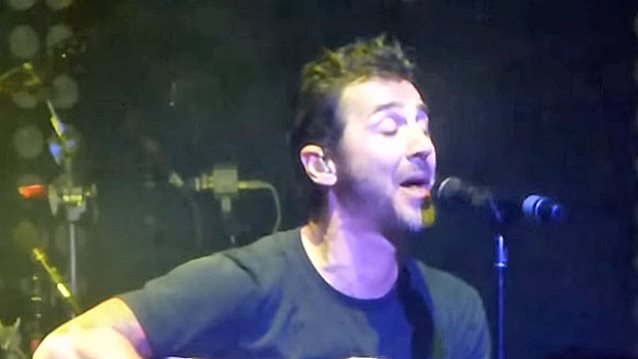 During GODSMACK's November 14 concert in Las Vegas, the band's frontman, Sully Erna, dedicated the song "Serenity" to the victims of Friday's terrorist attacks in Paris, France. While introducting the track, he said: "It doesn't matter if they're in another country, we're all human beings, and these motherfuckers in ISIS, I've gotta tell you… I hope at some point they can wipe out that shit and make it a fucking parking lot. I'm tired of this shit."

He continued: "So we're not gonna stop the show and ask you guys to kind of be quiet for a minute. We're just gonna do a song that I think kind of represents a moment like this. This is gonna be our version of a prayer. So, for whatever it's worth, you don't have to do a whole lot on here; maybe you can sing along with us. But whatever you do, just send out some really positive energy, because I am certain that a lot of people lost their children that night, a lot of people lost their parents that night. And so, it's our job as human beings to just kind of send out some good energy their way, you know what I mean?! That's what we do. We're all good people. So, Tony [Rombola, guitar], let's play a song and let's call this our prayer for the evening, okay?"

GODSMACK last month released a new song called "Inside Yourself" as a free download at the band's official web site. Erna said about the track: "This is a song about equality for all! Understanding that no one is worthless or any lesser than the next person. We are all equally important as human beings and should be treated that way. And for those of you who feel the need to cut others down to make yourself look superior, you seriously need to take a good look 'inside yourself.'"

GODSMACK has just completed its touring cycle for its latest album, 2014's "1000hp".

Asked about a timetable for its seventh studio album, Erna told Gibson.com, "The band is writing, and I think we'll probably start really getting together to arrange everything and start recording by early next year — maybe spring."