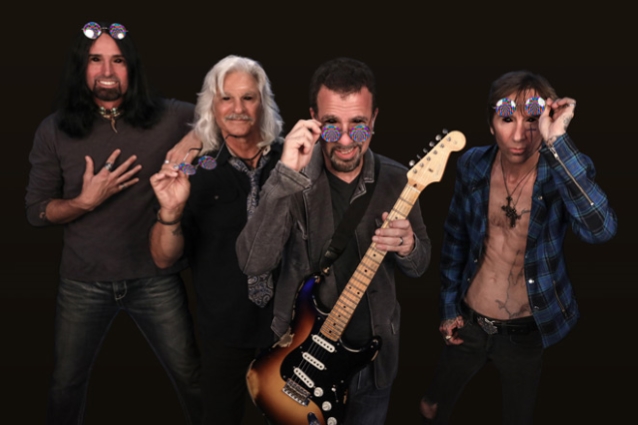 The group, which also featured Brian Carpenter on bass and Ray "Rafer John" Cerbone on vocals, released its second album, "The Shape Of Blues To Come", last July via Provogue/Mascot Label Group.

The news of THE APOCALYPSE BLUES REVUE's dissolution was broken by Cerbone, who blamed the group's breakup on scheduling conflicts.

He wrote in a Facebook post earlier today: "Six years ago, Shannon and Tony had a dream and that dream manifested itself into THE APOCALYPSE BLUES REVUE with me and Brian fully on board. It was apparent that together we had something very special. We also knew going in that it wasn't going to be easy to deal with schedules and timelines, but we all poured ourselves into this project heart and soul. Songs were written… shows were performed… a record company jumped on board and a first record was born that went to No. 2 on the blues charts and received rave reviews!! We toured and did shows in between Shannon and Tony's tours with GODSMACK. During those tours, we all still wrote and rehearsed staying at the ready for any shows that came up. All of you fans were amazing in how you supported and encouraged us in this project, especially during those 'quiet' times.

"Time passed and soon we recorded our second record. It became clear that the whole scheduling conflict was going to be hard to work around. Sometimes the stars and planets align and sometimes they don't. Unfortunately, THE APOCALYPSE BLUES REVUE had to be put on hold while bigger things in the music universe were taking place.

"Maybe too much time passed… maybe the future hold time was going to be too great… maybe it is just the timeline. Unfortunately. we've come to a place where, for THE APOCALYPSE BLUES REVUE at least, 'the music's over.'

"For bandmembers, it goes on… Shannon and Tony are currently fully immersed in GODSMACK with ideas for a new project with Brian in the not-too-distant future. As for me… I'm working on my first solo record of my fingerstyle, acoustic, singer/songwriter music set for release in early April. It ain't the blues but it has always been my first love. If you want to check it out on Facebook, the page is Ray Cerbone Americana And More.

"So from Shannon, Tony, Rafer and Brian, thank you all from the bottom of our hearts. We know we left a mark out there for sure.

"There could be some THE APOCALYPSE BLUES REVUE shows off in the future…who knows? We also still have some vinyl and CDs kickin' around.

"Farewell… The music lives forever in our hearts."

Hey ABR fans, Rafer here….some things I have to relate to ya all. Sit down and...

Posted by The Apocalypse Blues Revue on Thursday, February 21, 2019