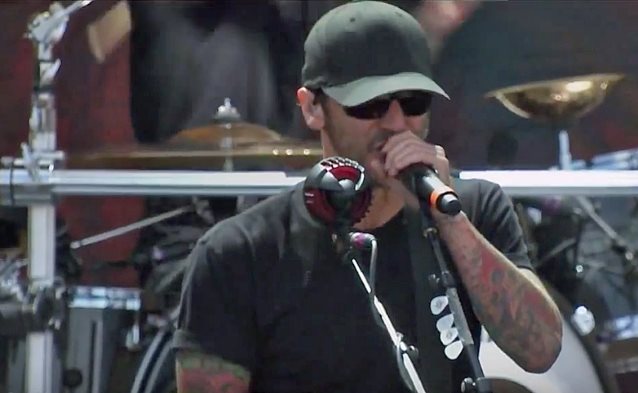 Professionally filmed video footage of GODSMACK's entire June 7 performance at the Rock Am Ring festival in Mendig, Germany can be seen below.

Continuing a partnership with the men and women of the armed forces that begun earlier in the band's career, GODSMACK has joined forces with a fellow Beantown institution the Red Sox Foundation and Massachusetts General Hospital Home Base Program in an effort to raise both awareness and donations for the needs of Post-9/11 military veterans.

Home Base was created as a joint venture between Massachusetts General Hospital and the Red Sox Foundation, and its goal is to help and heal post-9/11 veterans and their families by treating the invisible wounds of war — post-traumatic stress disorder and traumatic brain injury. The initiative emphasizes clinical care, wellness-based programs, community outreach, and education. To date, Home Base has served more than 7,500 veterans and family members with care and support and trained more than 10,000 clinicians nationally.

As part of their partnership, GODSMACK and Home Base have created a special online donation page for fans to donate and receive a free download of the band's new single, "What's Next?", from last year's "1000hp" album (Republic Records) via www.godsmack.com.

About the partnership, the group's members — Sully Erna (vocals, guitar), Tony Rombola (guitar), Robbie Merrill (bass) and Shannon Larkin (drums) — announced: "We felt that this song represented the story. It's about the only things that are certain — life and death — but 'what's next' has always been the big mystery. For these noble brave soldiers who put their lives on the line every day for us to allow us to live freely and fearlessly in the greatest country in the world, they don't know what's next now, and they need our help."