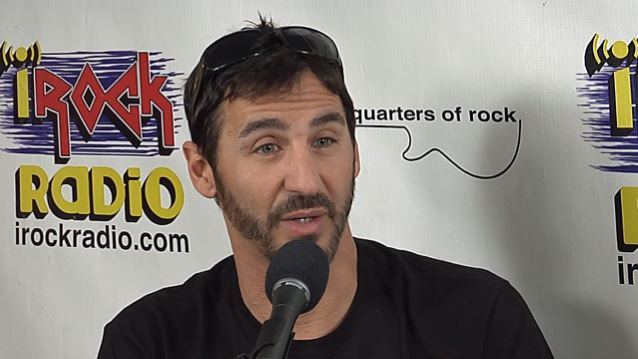 Mike Karolyi of iRockRadio.com recently conducted an interview with GODSMACK frontman Sully Erna. You can now watch the chat in three parts below. Also available is video footage of Sully performing his new solo song "Don't Comfort Me".

Citing RUSH's classic 1981 live album "Exit...Stage Left" as one of the LPs that changed his life, Erna said: "Being a drummer my whole life, [RUSH drummer] Neil Peart was probably the biggest influence in my life. He's the reason why I quit school, I quit family, I quit relationships, I quit everything to practice RUSH albums."

Asked if he has had a chance to tell Neil what an influence he has been on his life, Erna said: "Oh, yeah. I've met him a few times. We've actually become friends. As a matter of fact, we've been fiming along the way, over the last couple of years, what will be, at some point, twenty years of GODSMACK, a movie, and just interviewing different people along the way, and we got Neil Peart to agree to… I think we might have the last Neil Peart interview on tape. But he actually reviewed our drum solo, and it was really very surreal to hear Neil Peart talking about me and Shannon [Larkin, GODSMACK drummer] and how well he enjoyed it and the technical aspects of it and how entertaining it was. And it was pretty cool."

GODSMACK is planning to enter the studio at the end of next year to begin recording a new album for an early 2018 release, to coincide with the band's twentieth anniversary.

The band's follow-up to 2014's "1000hp" will be its first effort for BMG, following a split with the band's label home of nearly two decades, Republic/Universal.