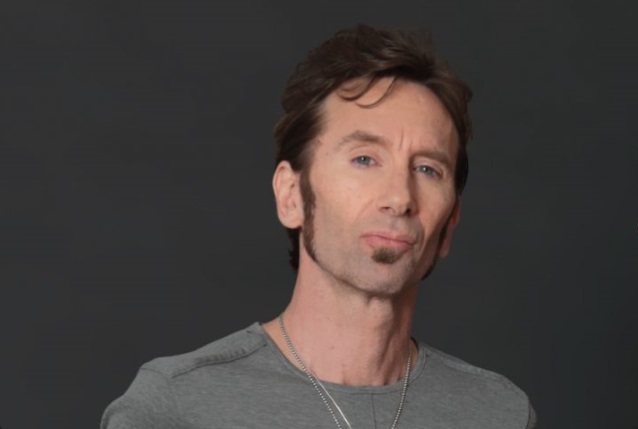 GODSMACK drummer Shannon Larkin was recently interviewed by Australia's Heavy magazine. The full conversation can be streamed below. A couple of excerpts follow (as transcribed by BLABBERMOUTH.NET):

On new album "When Legends Rise":

Shannon: "After we got off the '1000hp' [tour], we realized that this year was going to be our 20th anniversary. Every time we make a record, we try to make a change so that we don't become static and keep making the same record over and over again. For instance, the 'Faceless' record, we wanted a precise metal record, and the next one was bluesy, and the next one was more trippy, and so forth and so on. But [to] the critics, it's always the same thing — 'Oh, they've made another record and it sounds just like the last record.' So this one, Sully [Erna] really wanted to work with outside writers and make a more melodic record, a more mature record, as we've all turned 50 recently. We want to be real to ourselves in that we can continue doing GODSMACK and not feel like we're trying to act like kids up there. Heavy metal and the heavier music is really a young man's game, and it's full of piss and vinegar and angst, and we're not really that angry about that much anymore. We still want to keep the toughness and the street vibe, being from Boston and the band that we are, and of course we didn't want to alienate our fan base or anything, but we really made a conscious decision this time to try and just get a little more melodic, coupled with the fact that, after Sully made a couple solo records, he learned to play piano. Every record we've ever made has been tuned either in Drop-D or C, which [has] limited our melodic approach to any songwriting because we were stuck in these two keys to write songs in. And I mean, every record's been in those two keys, so him stretching out and learning to play piano and doing solo work that was really a far cry from what GODSMACK does, it opened up these new avenues that we could write songs now in different keys, and his voice, it sounds better than it ever has in twenty years in this band, and it's just because we found a new range for him to sing in. It was a conscious effort this time to really make something that people will go, 'Wow, this new GODSMACK — it is different this time.'"

On working with outside writers for the first time during the making of "When Legends Rise":

Shannon: "It wasn't as bad as we thought it might be, because there is egos involved, and songwriting is a very personal thing, and to give up that part of your band and let an outside person in that's not part of the... you know, there's us and them, and we're us, man. Everybody else is them, you know? So it was tough at first, but what made it easier was the fact that the guy we picked to produce the record, Erik Ron, he's also one of those producer/songwriter guys, so he right away brought to the table the first single 'Bulletproof'. That was a song that he wrote specifically with and for Sully, and when we heard that, it was, like, 'Wow, man,' because it still had all the elements of our band. I can't speak for these producer/songwriter guys — they're not in bands, they're producers — but they really do their research, and he's listened to every single GODSMACK record to get the vibe of what we're trying to do, but have a sense of, I don't know, a mainstream sensibility that we just don't have. Sully and I wrote a lot of music in the past for the band, and we can't really write these kind of more palatable, melodic songs. We're metal and punk dudes, but as we age, we were raised on what everybody else our age was, which was blues and classic rock — [LED] ZEPPELIN and [BLACK] SABBATH and all that — so the proof was in the pudding. It was all about the music, and when this guy came with the first three or four songs that he presented to us, then we were just like, 'Wow, man. This is really cool, and once we get a hold of these things and put our instrumentation on things, it will end up sounding like GODSMACK.' I'm super-stoked about it. I think ironically, even though it is a more melodic, mainstream-sounding record production-wise, I thought that we captured our essence, I think, and still created something different than we've done for twenty years."

The new album follows up 2014's "1000hp" and is the band's first release through BMG after splitting with its longtime home, Republic/Universal.

GODSMACK will perform at several music festivals this spring and summer before launching a tour with SHINEDOWN on July 22 in Clarkston, Michigan.

Listen to "Godsmack: The Legends Rise" on Spreaker.