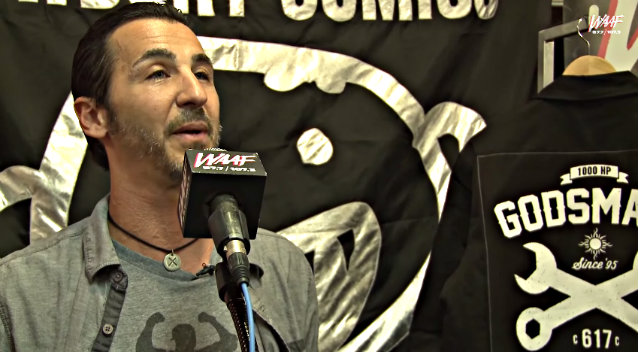 Mayor Martin J. Walsh officially declared Wednesday, August 6 "Godsmack Day" in the city of Boston at Newbury Comics, where the first 500 fans to buy GODSMACK's sixth full-length album, "1000hp" (One Thousand Horsepower), received a wristband that allowed them to get their copy signed by the band.

The Mayor officially presented the band with this distinction in the Newbury Comics store at Faneuil Hall at 4:30 p.m. WAAF's Mike Hsu introduced the Mayor and covered the proclamation live on WAAF.

"I just wanna say that this is an extremely proud day for this band and for myself, because I was born and raised here and spent my whole life in the suburbs of Boston and inside the city," GODSMACK frontman Sully Erna said at the event. "And there's a reason why I wore this shirt today, because I believe that we're one of the strongest cities in the world, and I love the integrity and the strength here, and I love the work ethic here. And I believe there's a reason why GODSMACK has gone on to one of the best hard rock bands in the world, because, as Boston is a very hard-working city, very hard-working town, so is this band. And it's a real honor to be appreciated for all the hard work we do. This is a band that still plays our instruments and goes out there and sweats blood and tears for the fans and for the world. And it's just a really, really a… a proud day. So, Mayor Walsh, we wanna thank you so much. And we're gonna present you with the first of the GODSMACK '1000hp' touring jackets."

Video footage of the event can be seen below.