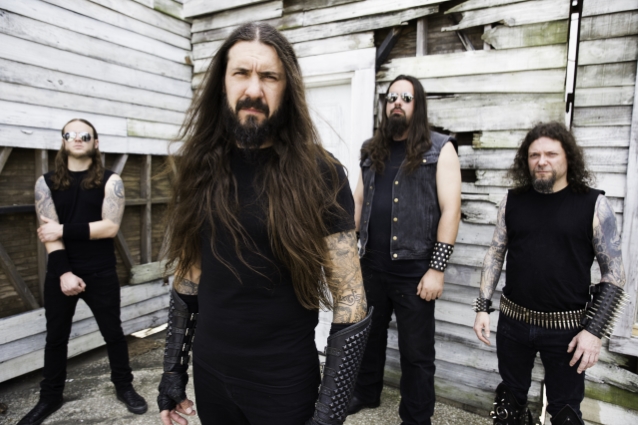 Tristan Pratt of The Metal Tris conducted an interview with frontman Ben Falgoust of New Orleans blackened death metallers GOATWHORE. You can watch the entire chat below. A few excerpts follow (transcribed by BLABBERMOUTH.NET).

On the lyrical themes on their latest studio album, 2017's "Vengeful Ascension":

Ben: "It's a mixture. We've always had a mixture of things and because of the stuff we write, some of the stuff we do is more like rudimented in traditional black metal, like VENOM and BATHORY and CELTIC FROST, so it's got a little bit more of a, I don't want say a basic, but a primitive aspect to it. Other songs we do, we'll fill in and be a little bit deeper in different aspects like that. It's all mixed with different things I read and my visions on things and my opinions on things in a sense. Some people won't really pull it out because it's abstract sometimes. That's what's unique about being an artist — you can offer something out there and people can kind of pull their own ideas from it and everything and kind of go through it. The biggest thing was, I visited it before, but [John] Milton's 'Paradise Lost'. There's some people that shun the whole idea, when you bring up Lucifer and everything like that, but there's an aspect of it where I think it connects with human nature a lot. Like the idea of you get to a point where you do hit you might call it hell or the bottom of the barrel or whatever you might do and you have to work yourself back up to a point. And when you read things in 'Paradise Lost', and as you get older and read things, you start to interpret things in different ways and those aspects come into play and you start to see there is an element where Lucifer is more like an anti-hero, you know what I'm saying? He's coming up from something and he realizes maybe there were certain decisions he made that wasn't right, or there were decisions he made that were right, but he just needed to get back to the top again. Some of us go through life and everything works out perfectly. Some of us go through life and we have these pitfalls and we have these things, but they help build us to an individual who we are and then we see things in these aspects. And I think with all these things, that's the whole role of it. I've delved into it a little deeper as far as that with some of the 'Vengeful Ascension' stuff. I just think that some people take things out of place sometimes. Then they judge things in a certain way. Sometimes you have to stop, you have to understand that bands are artists, and especially within metal, a lot of bands are singing about the negative or odd things in life and they're presenting that, and some people might come down on 'em and be like, 'Oh, you shouldn't bring that up.' But you should. History is important. I think history is very important. If you don't know it and people present it, then it helps people evolve and understand that this happened in the past and don't duplicate it. If you shun it and you put it behind you, then it's inevitable that it will be duplicated again."

On whether GOATWHORE has been attacked for their views:

Ben: "As a band and what we do, we're not really a political band. I'm not really a solid political person and definitely some of the things I know about and some things I don't know about, so there are some things I won't talk about because my knowledge isn't there. It's just like with anything: You shouldn't talk about something if you don't have full knowledge on it. The thing about today is you have social media and things like that. It's like the hugest soapbox in the world and everyone wants to stand on it and voice their opinion. Your opinion is great, but before you start saying anything, make sure you know all the facts of everything. Go after everything, find out about everything, be knowledgeable about it. Knowledge is the key. That's the thing with the luciferian aspect, was reading and going into things. Knowledge is the key, knowledge is the light. People need to follow that idea and go into things before they start blurting things off."

On why Lucifer and Satan are so synonymous with heavy metal music:

Ben: "I think it's always been the form of the idea of rebellion and being an individual and being different and things like that. I think it's always been this thing that people shun that because through history, it was labeled as this evil thing and if you followed this, this was the bad thing. As time went along, you started to read so much more into it and different stories and you started to see that it's an individual aspect. From when you are younger and growing up and things influence you, things change through time and then your aspect changes and how you determine things and determine how you're going to react as an individual. You're not necessarily that really different, but because you followed a different path in the sense of the majority, then you're seen as an outsider. But I think it's really unique and I think in time, people open up to it more. As metal bands become bigger in a certain sense, like, take a band like BEHEMOTH and as they evolve and get bigger and the ideas behind what they do and what they talk about, is really unique and is really thought provoking and it helps people understand more."

GOATWHORE will headline the eighth installment of the "Metal Alliance Tour". The "Metal Alliance Tour" will make the trek across United States and Canada starting on Halloween at GOATWHORE's hometown on New Orleans and continue through November. Joining the tour are New York City street punk legends THE CASUALTIES, sludge metal band BLACK TUSK, Boston hardcore outfit GREAT AMERICAN GHOST and opening the tour will be split between MORTHEREON (October 31 - November 17) and GOZU (November 18 - November 30).