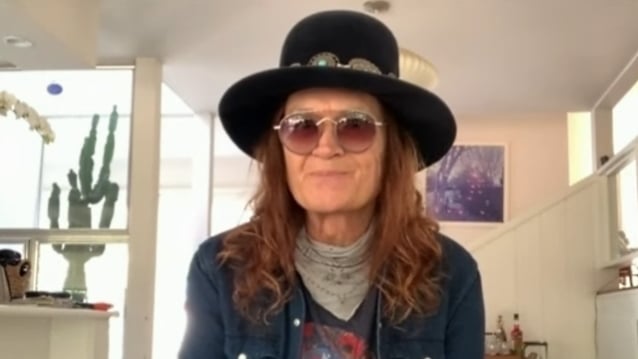 In a new interview with "That Jamieson Show", Glenn Hughes was asked if he would consider taking part in a DEEP PURPLE reunion tour featuring him, David Coverdale and Ian Gillan all sharing the stage in celebration of the band's legacy. He responded (see video below): "I would not consider it, because I'm way past that now. It was such a long time ago. Let's just say that there are some unresolved problems from the past. And for me, the time I have left to do my work on this planet, I need to keep making new music and plowing on forward. Yes, I have done some shows in respect to DEEP PURPLE music, but as far as re-engaging with them chaps again in the live form, I can't see it happening."

Hughes went on to clarify that his issues with DEEP PURPLE have "nothing to do with David Coverdale. I love him," he explained. "I would work with David again if we get a chance, but anybody else, no."

Known as the "voice of rock," Hughes spent key years of his career as the beloved bassist and vocalist of DEEP PURPLE, appearing on the classic albums "Burn", "Stormbringer" and "Come Taste the Band". More recently, he played various hits and deep cuts from the DEEP PURPLE catalog, including "Burn", "Stormbringer", "Sail Away" and "Smoke On The Water", as part of his "Glenn Hughes Performs Classic Deep Purple Live" tour, which was launched in 2017.

Two months ago, Hughes told Eonmusic that DEEP PURPLE's 2016 induction into the Rock And Roll Hall Of Fame, where he was honored along with other former and current members of the band, "was a little difficult, because of, let's call it personality problems. It was David and I holding hands, and the other guys, unfortunately," he said. "We just don't get along with the other guys at all. So, we kept ourselves to ourselves — David and Glenn, with our wives — and it was great. David and I, what a great time. And we closed the show with CHEAP TRICK and Sheryl Crow, and our friends in CHICAGO.

"You know, it's a touchy subject," he continued. "It was not an easy night for us. If you look at the body language, it's pretty obvious. But again, David and I have been thick and thin for so long; I just dearly love him. Regarding DEEP PURPLE, I have no idea what they're doing, and I don't really care."

Hughes's comments came less than two months after David expressed his exasperation at PURPLE over how he and Glenn were treated by their former band ahead of the Rock Hall induction. The singer, who played with DEEP PURPLE along with Hughes from 1973 to 1976, said: "Glenn Hughes and I were told, 'Well, we don't want you singing with us.' Initially, I'd spoken to Ian [Gillan] about coming up and singing the backgrounds of 'Smoke On The Water', because originally they were going to close the show. So, that suddenly was pulled. They tried to stop us doing speeches, and my wife was fucking furious, apart from the fact she spent a fortune on posh dresses. [Laughs]"

DEEP PURPLE's acceptance speeches included turns from Gillan, Glover, Paice, Coverdale and Hughes before the current lineup of DEEP PURPLE — Gillan, Glover, Paice, guitarist Steve Morse and keyboardist Don Airey — took the stage and played a short set consisting of "Highway Star", "Green Onions" (with an image of Lord behind them), "Hush" and "Smoke On The Water".