Glenn Hughes of making a documentary of his current world tour, which sees him performing a complete set of DEEP PURPLE songs for the first time since leaving the band in 1976.

Speaking to Jack Antonio of "Do You Know Jack?", Hughes said (hear audio below): "I'm about to embark on an 18-month-long Glenn Hughes 'Classic Deep Purple Live'. It's all the songs I recorded and wrote back in the '70s. It's the first time I've ever done a show like this, where it's a production, where it's a full-production show of all those hits, from that wonderful moment in time in the early '70s where you can never repeat that. So I've never done a show quite like this before."

Hughes added that he is "recording all of the shows in South America, which are happening in April. Only because I need to get this recorded," he said. "I think everybody should record their music that they recorded all those years ago later in life. And in South America, I have an amazing career down there, and I think it will be fantastic to play these songs and record them down there."

According to Hughes, the documentary will include footage from various concerts filmed all over the world. "But the [main] show itself will be recorded later on in the year — I think it might be recorded in the U.S. or Canada," he said. "So we'll have to wait [and see] what happens."

Glenn said that DEEP PURPLE fans should not expect to hear faithful versions of the songs as they appear on the band's classic albums. "What I'm not doing is I'm not playing studio arrangements of the songs; I'm actually doing live arrangements from the mid-'70s of these songs that were taken from California Jam or live in Europe or live in L.A. or live in Paris or live in Tokyo," he explained. "I'm doing stuff that no one has done, which is duplicate those arrangements that we did early in the '70s, which is pretty remarkable, actually. It's sounding pretty good."

Hughes recently told the the "White Line Fever" podcast that he will be the only person capable of playing DEEP PURPLE's songs with authenticity once the band completes its "The Long Goodbye" tour.

"All I can say to you is I'm doing the respectful thing by playing these songs," Hughes said. "I may be the last man standing to do this, who can actually carry this off, and I'm going to embrace it and give it some love and bring it back to the fans.

"I just figured it was time to carry the torch, if you will, and play the songs I recorded and wrote whilst I was in the band — three albums and two live albums — and play a couple of the songs they did with David [Coverdale] in Mk III and a couple of Mk II hits which I will carry in the same arrangement that I did back in the seventies. And I think it will be an incredible thing for me to embrace the songs and for the songs to be very believable from somebody's who's spiritually inclined to do that."

Hughes said his motivations surrounded the honoring of fallen bandmates. "You know why I'm doing it? I lost two members in Jon Lord and Tommy Bolin," he explained. "I'm basically gracefully saying goodbye to those guys. I'm also saying goodbye… I'm going to be doing some touring behind this and it's very therapeutic for me, it's very cathartic to do this and to do it with love because, you know, I almost didn't make it.

"At the end of the seventies, I was almost a statistic so I stepped out of the fast lane and got well. All these years later, I'm spiritually in a good place and I'm trying to bring the love back to the fans and the followers. There's two generations of DEEP PURPLE, the fans that are my age and their children." 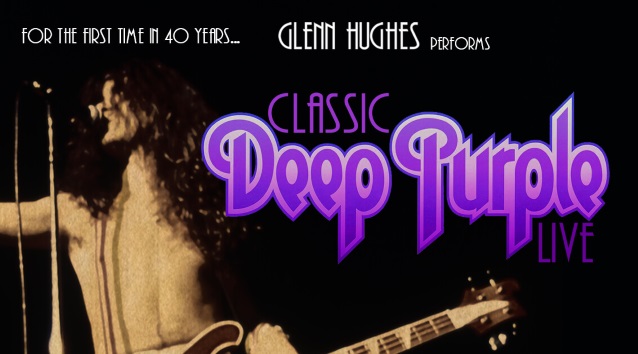