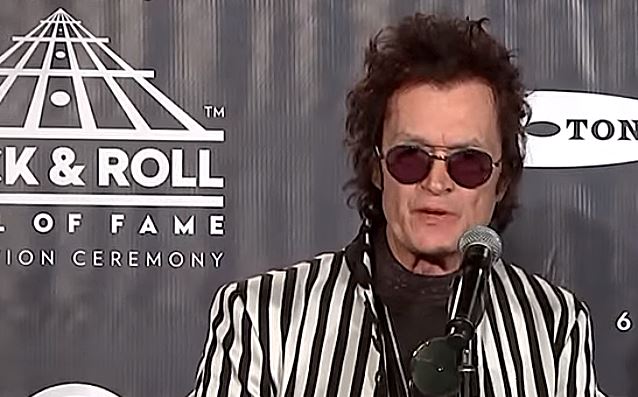 In a brand new interview with Metal-Rules.com, ex-DEEP PURPLE bassist/vocalist Glenn Hughes was asked about the fact that he and his former DEEP PURPLE bandmate David Coverdale didn't perform with the band at their Rock And Roll Hall Of Fame induction earlier in the month. He said: "There is a band out there called DEEP PURPLE featuring Ian Paice, Ian Gillan, Roger Glover which was essentially Mach 2. Every artist gets to do three songs. Now let me talk to you openly as there was a 99.9 percent chance that Hughes and Coverdale would not be invited to sing. I'm not going to name names, as there is a member who didn't feel it was appropriate that we should sing. So David and I braved it together as we were arm and arm all the way through. But I knew by the end of the night it would not happen. CHEAP TRICK closed the show and they invited us to play with Sheryl Crow and Grace Potter."

Hughes denied that he bothered by the fact that he didn't end up performing with PURPLE at the event. "Am I upset about not singing with DEEP PURPLE? Not at all," he said. "Everybody knows that David and I can sing. Everybody knows that we were in the band. All that mattered to me was accepting the award on behalf of DEEP PURPLE and the fans."

Glenn also talked about the absence from the induction of original DEEP PURPLE guitarist Ritchie Blackmore. He said: "I can say that David spoke to Ritchie in 2012 during the first nomination. David asked him, 'When we get in, are you going to attend?' He said, 'Oh no, not at all.' David is my brother and he would have no reason to fib to me, but Ritchie had no intention of attending the Hall Of Fame. It had nothing to do with him and Gillan not speaking. He just didn't want to show up. Nobody stopped him, and you can't stop an artist from getting inducted unless the chairman of the Hall Of Fame bans you. The chairman of the Hall Of Fame reached out to Ritchie with both hands and Ritchie gracefully declined. He didn't say anything bad. He just said, 'Thank you. I'm not going to attend.' People need to know it was a gracefully done. There were two guys that didn't show up: Ritchie, who declined; and Jon [Lord, former DEEP PURPLE keyboardist] who had passed."

METALLICA drummer Lars Ulrich inducted DEEP PURPLE into the Rock Hall. PURPLE had been on the ballot three times and Ulrich has been championing their inclusion for years.

"It's a big disappointment for me that [Blackmore] wasn't here tonight," said Coverdale. "I e-mailed his manager a couple of days ago and extended a personal invitation. I never really got a response. Ritchie and I reconnected in 2012 after the loss of Jon Lord just to express my condolences and we buried the hatchet... which was great."

DEEP PURPLE singer Ian Gillan defended the band's decision to only perform with the group's current lineup at the Rock Hall induction, explaining that "there [was] no slight intended nor any desire to upset anyone" with this move.