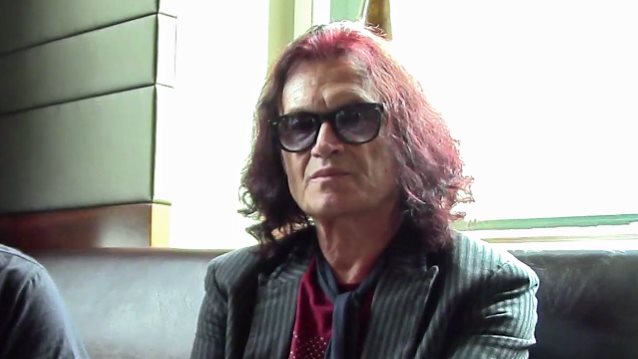 Glenn Hughes spoke to Promoportal-Germany about BLACK COUNTRY COMMUNION's much-anticipated fourth album, which is tentatively due this fall.

The supergroup, which features Hughes alongside drummer Jason Bonham (LED ZEPPELIN, FOREIGNER), keyboardist Derek Sherinian (DREAM THEATER, ALICE COOPER, BILLY IDOL) and blues-rock guitarist/vocalist Joe Bonamassa, recorded the follow-up to 2012's "Afterglow" at a Hollywood, California studio after a near-four-year split that was caused by tensions between Bonamassa and Hughes.

Speaking about how he reconnected with his BLACK COUNTRY COMMUNION bandmates, Hughes said: "The beautiful thing is when we kind of separated four years ago, we knew we were coming back, we knew we would have a reunion. So, a year ago, I was getting inducted into the [Rock And Roll] Hall Of Fame with DEEP PURPLE, and Joe called me to congratulate me and ask when I would be coming back to Los Angeles, where I live. And I said I'd be home on Wednesday, and we had dinner on Thursday, and we talked about getting the band back together to do another album."

Asked if BLACK COUNTRY COMMUNION is planning on hitting the road in support of the upcoming disc, Hughes said: "We're gonna announce something soon. I'm not sure what's going on right now, because it's impossible to talk about it until it's planned. But we're hoping to do some shows. I would hope so. We really wanna play."

Hughes also talked about the chemistry between the BLACK COUNTRY COMMUNION members, especially since all the musicians have had successful careers prior to launching the group.

"This band was meant to be," Glenn said. "It was formed out of a friendship with Joe and I. We got the [other] guys to come in, and it's always been a strong brotherhood. And we're just very lucky and fortunate to have met. I've known Jason since he was [a kid]. I just think that these four guys in this band are the right guys to play in the band."

Helming the new BLACK COUNTRY COMMUNION album once again is Kevin Shirley, a man known for his production work with artists such as IRON MAIDEN, JOURNEY and Bonamassa. Shirley has worked closely with Joe on every album that the guitarist has recorded since 2006's "You & Me", a period of time that has seen the artist's success and popularity grow massively.