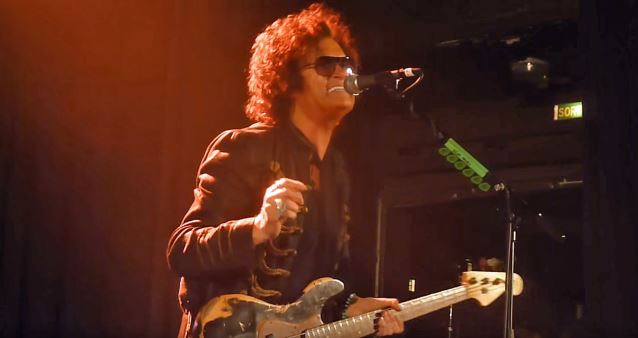 Former DEEP PURPLE bassist/vocalist Glenn Hughes spoke to Billboard.com about the band's upcoming induction into the Rock And Roll Hall Of Fame and the controversy surrounding guitarist Ritchie Blackmore's decision to sit out the ceremony because the current touring configuration of the band refuses to perform with the guitarist at the event.

"All I know is I'm getting the award," Hughes said. "There's a lot of gossip and innuendo about who's saying what. I'd love to play. I'd love to sing. And so would David [Coverdale]."

He added: "A month ago, David said to me, 'Shall I reach out to Ian Gillan to figure out what we're gonna do?' He came back and told me that there's a problem that Don [Airey, current DEEP PURPLE keyboardist] and Steve [Morse, current DEEP PURPLE guitarist] aren't getting inducted and there's all sorts of scenarios with that and grumblings and this and that, and I said, 'Well, I'm just gonna stay out of the way,' and Coverdale is as well. If Ian Gillan wants to run the show on behalf of his DEEP PURPLE, that's his business; my business is to show up and gracefully accept my award. But we're really hoping that we will be invited to sing. I'd like to think that DEEP PURPLE can be just one big happy family on the night, y'know? Egos outside the door and be graceful in what we do."

Ian Gillan last month defended DEEP PURPLE's decision to only perform with the group's current lineup at the upcoming Rock And Roll Hall Of Fame induction, explaining that "there is no slight intended nor any desire to upset anyone" with this move.

The Rock And Roll Hall Of Fame induction ceremony seemed like a rare opportunity for DEEP PURPLE to reunite with Blackmore, who wrote many of the band's most memorable riffs, including "Smoke on the Water", but hasn't played with the group since 1993.

But Gillan has since confirmed that no such reunion will take place, saying that only "the living breathing DEEP PURPLE" will play at the event, which will take place on April 8 at the Barclays Center in Brooklyn, New York.

It should be noted that Gillan has insisted that he has no problems with Blackmore attending the Rock Hall ceremony and has said that he is not opposed to sharing the stage with the guitarist at the end of the April 8 event. "We would love to perform with Ritchie, David, Glenn et al on 'Smoke On The Water' in the encore jam," Ian said.