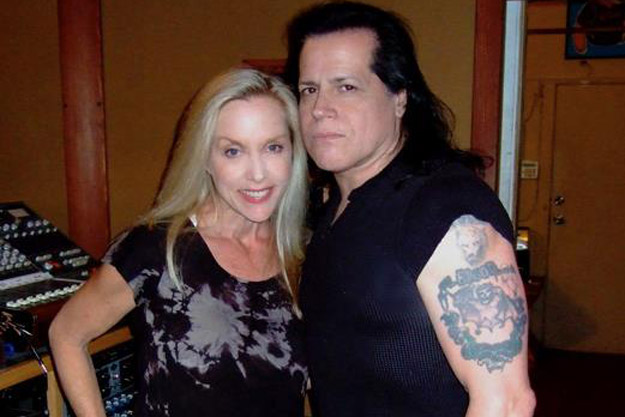 DANZIG's cover version of the the classic Lee Hazelwood/Nancy Sinatra song "Some Velvet Morning", featuring a guest appearance by Cherie Currie (THE RUNAWAYS), can be streamed at Danzig-Verotik.com. The track will appear on Danzig's upcoming covers album, which will also include Glenn's renditions of classic songs from BLACK SABBATH, ELVIS PRESLEY and ZZ TOP, among others.

In a recent interview with Full Metal Jackie, Glenn stated about the bands he is covering on the album: "Elvis, of course, I heard when I was a kid and SABBATH when I was a young teenager, but the ZZ TOP song is a song I heard later on because it's a song that no one would ever think I would cover, because it's not one of their earlier songs. It's a song I always liked and thought that they didn't do a good job with. I mean, it's terrible to say that but… it's a really good song and so I wanted to cover it and give it the respect it deserved. Maybe they didn't think about it the way I did, maybe when they were doing it they had a certain thing in mind. My idea of covers is that you should never cover a song and do it exactly like the artist because everyone's always going to compare it to the way the original artists did it and they're just going to go, 'Oh, I like the original better.' I wanted to make it my own and take it in a different direction, maybe a different direction they didn't really think of at the time or would never think of, because I have a much different background than they do. There's a ton of other cool covers on there. I did a lot of covers people wouldn't think I would do, like 'Biker' soundtrack theme song that I made crazy. There's a Lee Hazlewood/Nancy Sinatra cover on there and I had Cherie Currie come down and sing the Nancy Sinatra part. She's really cool and has a great voice and it was just awesome and I wanted to keep that cool, older, '70s vibe because the MISFITS came on the tail end of the '70s and I wanted to keep that vibe. The managers and lots of other people suggested the new alternative girls and I was, like, 'That's not what I want and here's who I'm thinking of,' and they were like 'What?' and it's fantastic; she did such a great job."