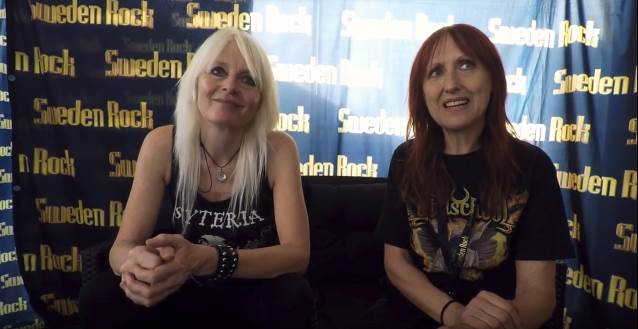 YesterdazeNews conducted an interview with GIRLSCHOOL members Jackie Chambers (guitar, vocals) and Enid Williams (bass, vocals) at this year's Sweden Rock Festival, which was held last month in Sölvesborg, Sweden. You can now watch the chat below.

Speaking about how the music business has changed in the 40 years since GIRLSCHOOL was formed, Jackie said: "It's a different world, isn't it? The music business now, [compared] to what it was 20 years ago even, it's completely different — I mean, streaming and downloads. Years ago, you would make so much money from CDs and that was, basically, your livelihood. Now you can't do that, so more bands are having to tour to actually make a living from this, really. That's the way it is. Bands don't mind doing that, but it's really difficult to keep bands going 'cause a lot of people just don't want to carry on doing it, because that's just not the way it works anymore."

Added Enid: "Everything changes, and you can't avoid that. And some things are better and some things aren't. So, for example, certainly 40 years ago, 30 years ago, maybe 20, you had to kind of move to London or New York or L.A. and you had to wait for an A&R guy — and it would be a guy, generally — to sign you up. And, to some extent, people were treated like kids in the '60s and '70s. So you had the chance to go in a studio with a big producer and…"

Continued Jackie: "…and be developed as well, where there's none of that now, is there? A band [releases] one single, and if that single fails, that's it — they're finished. And you see all these kids now coming up — massive by the age of 20, 21, and by 22, their career is finished. It's, like, wow! And in a lot of cases 'The X Factor' and 'Britain's Got Talent', all these new ways of being famous — 15 minutes of fame, as we call it, really…"

Said Enid: "But if you look at the bands that were coming through before, you'd have loads of bands but only a few would get signed up, and if somebody didn't get signed up after a few years, then maybe they'd go and get steady jobs or whatever, whereas now anybody can play music anywhere in the world. So you do get… For example, you've got a couple of Scandinavian singers breaking through and… it's more egalitarian; it's that DIY attitude going back to punk, to a certain degree, so that's a really great thing."

Added Jackie: "Any band now can put out a single. Things like TuneCore, things like that, you can release a single and just do it yourself. Pledge campaigns — you make money to actually do it yourself; record your album how you want it, not how a record company wants it. So there's the good side of all this new technology. Put it out yourself, on your own label, if you want, and tour when you want, so that's the good side."

Said Enid: "But some of it's become more corporate as well. Some of the bigger tours, it's much more run like a business. And sometimes one misses the sex, drugs and rock and roll kind of… Not that those things don't exist, but it's not quite the same."