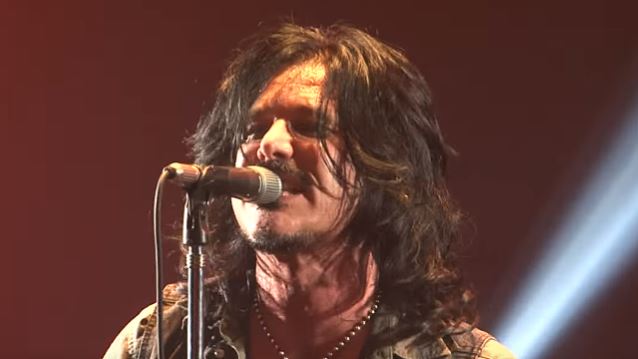 During a brand new interview with Argentinean rock journalist Lucas H. Gordon, former GUNS N' ROSES guitarist Gilby Clarke was once again asked for his thoughts on the reunion of long-estranged GN'R singer Axl Rose and guitarist Slash for a handful of comeback shows in April and a full U.S. tour during the summer. Clarke, who was not an original member of the group, said: "In all honesty, I haven't seen [any of the recent GN'R shows], so I don't have an opinion yet."

He continued: "First of all, I'm happy that the guys are back together. I think it's really important to music, especially rock and roll music, that GUNS N' ROSES is a viable band that's out performing right now. I know Axl has been out there with his band playing, but it doesn't get any better than having Slash back in the band. So with Slash and Axl back together, I really think they can have some great shows and hopefully write some good music together and keep the band name and legacy alive."

Regarding whether he thinks the GN'R reunion will last, Gilby said: "I was a part of the band twenty years ago, and a lot has happened in that amount of time. I don't know… I honestly don't know. People were asking me questions last year: 'Do you think GUNS N' ROSES are gonna get back together?' And I kept saying, 'No.' I didn't. I honestly didn't. So I'm surprised, just like a lot of people are, that the band's back together. But I think it's a great thing for music."

Asked if he would rejoin GUNS N' ROSES if he was asked to take part in the band's reunion tour, Gilby said: "You know, I don't really wanna answer that, because I don't know. I honestly don't know. It's a hypothetical question, it's a hypothetical situation. So I really don't know. I mean, before all this happened, people [would] say, 'Would you be a part of the reunion?' And I always said, 'Absolutely!' Look, I love the music of the band, I love the band and the performance, but this GUNS N' ROSES isn't the GUNS N' ROSES that I was a part of, so it's a hard question to ask right now."