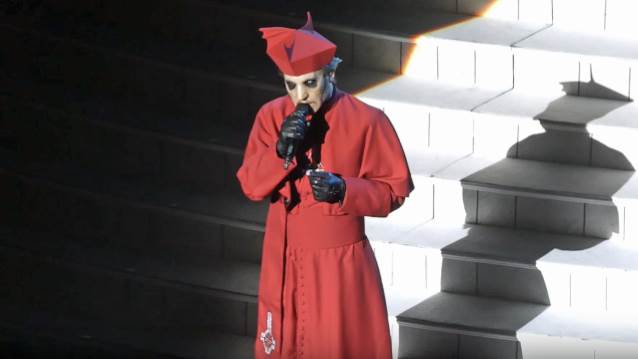 GHOST leader Tobias Forge was interviewed on the June 15-17 edition of Full Metal Jackie's nationally syndicated radio show. You can now listen to the chat using the Podbean widget below.

Asked how the recent passings of larger-than-life rock stars like David Bowie and Lemmy Kilmister have motivated GHOST in terms of filling the void that has been left in the rock music landscape for creative geniuses that seem God-like and untouchable, Forge said: "I can give two different answers. One is from a personal point of view, where I am a big appreciator of many of these people's work and I, like most others, have spent, I think, most of our life just taking them for granted, that they were gonna be there forever. And now when it's clearly showing that that might not be the case, I think that that stirs up a lot of angst in… At least speaking for myself, I really feel saddened by knowing that, obviously, these people have already passed, but just checking a festival poster and knowing that in 10 years, these guys will not be there. From a professional point of view, I think it means that rock music needs to step up. We need to have new, bigger bands. Bands need to step up and try to fill these spots.

"I definitely don't think that rock is dead in any way. But I think that there has been a lack of new talent or new ambition," he continued.

"It's hard to really put my finger on what has happened, but I think that rock, in general, has been extremely dominated by bands that are 30, 40 years old, which there's nothing wrong with it, but now as they are disappearing, you can truly tell that there's a big gap between the big bands and the ones underneath and the ones on the bottom," he said. "And that's alarming. I think that other music styles, other music genres have been better to fill their new, up-and-coming artists that get a lot of recognition.

"I don't wanna compare rock and hip-hop in any way — and I'm a rock guy; I'm not a hip-hop guy in any way — but the hip-hop scene has been way better at bringing up new talent where artists and bands that weren't around ten years ago are now filling arenas and stadiums and are a huge success."

Upon its release via Loma Vista Recordings last month, GHOST's latest album, "Prequelle" landed at position No. 3 on the Billboard 200 chart, shifting 66,000 equivalent album units during its first week of release. Of that sum, around 61,000 were in traditional album sales.

GHOST's first-week tally benefited from a concert ticket/album sale redemption offer in association with the band's spring U.S. theater tour, as well as a pair of arena dates later this year.