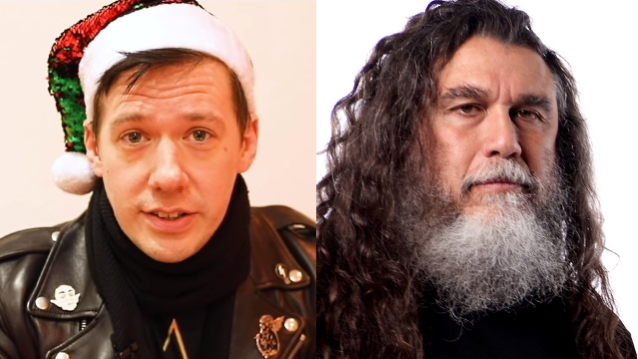 GHOST's Tobias Forge and LACUNA COIL's Cristina Scabbia recently answered a number of fan-submitted Christmas-related questions for the viewers of France's Heavy1 TV YouTube channel. Asked which rock musician would make a "cool" Santa Claus, Forge said (see video below): "Just based on looks, I think that Billy Gibbons [ZZ TOP] would probably be a good Santa. Nowadays, there are a lot of aged — and I say aged nicely; that is meant as a compliment — aged musicians who [do] have kind of a Santa aura. So there are some to choose from, I think. For a good while there, Tom Araya from SLAYER had a little bit of a Santa thing going, and I think that he would be a very pleasant, very calm, subdued [laughs] Santa. So, yeah, if I had to choose… Billy Gibbons, Tom Araya… Leif Edling from CANDLEMASS has a nice, gray beard nowadays; he would make a good Santa. He would probably do lots of good rhymes as well, I think. He's good on rhymes. So, that's a few to choose from."

Back in 2015, SLAYER's Kerry King admitted in an interview that he wasn't a GHOST fan. "I love the imagery… I love it. I just hate the fucking music," he said. "I like them [as people]. You know, they've been on many tours with us. I just… I can't [get into their music]. And I tried. I wanna like 'em, and I can't. I got their CD from Brian Slagel from Metal Blade. It was when Gary Holt [EXODUS and SLAYER guitarist] first started playing with us, and I picked up Gary. And I'm, like, 'Brian said this is awesome, man.' So we put it in, going to practice. It wasn't awesome. It wasn't awesome for me. It wasn't awesome for [Gary] either. I'm, like, 'Well, maybe the first song sucks.' [Laughs] And we went to the next one. It's just not for me. I know GHOST is hugely popular, and I'm very happy for their popularity. And, like I said, [they're] the nicest guys you'll ever meet. It's just not my music. And I've tried so hard. [Laughs]"

King later said that the way the metal media covered his original comments about GHOST was overblown. He told DigBoston: "The problem with doing interviews is that whoever you're doing the interview with may or may not have bad intentions. They didn't see the part where I said they were wonderful dudes. I said I love the imagery. I tried to like their music, but it's just not my thing. Somehow that became 'Kerry King hates fucking GHOST.' Whatever I say is just taken out of context for the furthering of whatever crappy web site they write for."