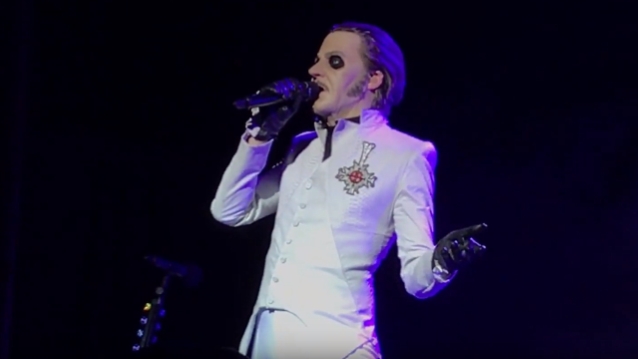 GHOST mastermind Tobias Forge spoke to Australia's Silver Tiger Media about the importance of his alter ego, explaining that he "had to transform into someone else in order to be interesting enough to be able to be on stage."

Forge, who creates demonic characters for every album, performed as a "new" Papa Emeritus on each of the band's first three LPs, with each version of Papa replacing the one that came before it. Papa Emeritus III was retired in favor of Cardinal Copia before the release of last year's "Prequelle".

Asked about the inspiration for his alter ego and GHOST's theatrical stage show, Forge said: "I think it stems from the fact that when I was a kid, being a fan of Alice Cooper, being a fan of THE ROLLING STONES, being a fan of all these larger-than-life rock bands — Dee Snider and Nikki Sixx and Blackie Lawless — but also Roger Waters and David Gilmour, I always thought that in order to become a hero like that, you needed to be from someplace else. So I thought that as I grow up, I need to transform into someone else in order to fit into the idea of how I wanted my rock star. Because I couldn't imagine that there would be someone from my street, my house, living in my room, would be interesting enough to be a rock star. And I think that therefore you see a pattern of enhanced personas in each of these bands, in some way or form.

"It sort of dawned on me fairly recently, like, man, I've worn makeup almost every time I've been up on stage, in any band, and I've always had a pseudonym, or in some way or form, altered myself into… Yeah, essentially, it didn't change much from my idea when I was seven years old to how I am now, being 38," he continued. "I had to transform into someone else in order to be interesting enough to be able to be on stage. Because I can't really see myself as the kid from Linköping [in Sweden] to be that person."

Pressed about whose life he prefers, his own or that of his alter ego, Forge replied: "Now I've started to like my own. But for most of my life, I was very unhappy… 'discontent' was, I guess, the word. I've always been very in favor of becoming someone else and having different possibilities than I had. Now I know that all of the things that I had, and I was blessed with, was actually in my favor, but when I was a kid, I thought that was a disadvantage. It's just that I've come to a point in life where I have the therapeutical blessing that I get to talk about these things all the time. And also that my achievements that I've done as an individual, even though it's been dressed up as another individual, has been applauded. So my background is now valuable. But up until very recently, I thought my background was not very good. [Laughs] That's why I feel way more content with life. And, of course, because I'm doing well. Life is good."