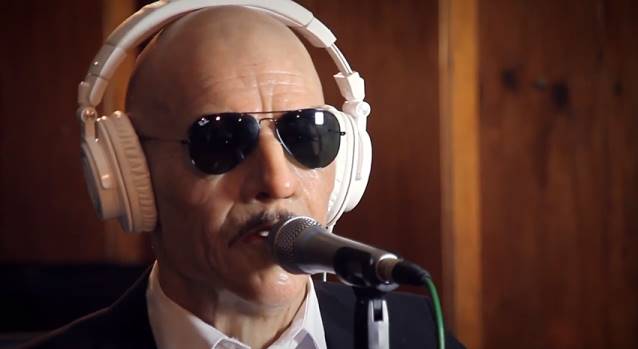 Swedish occult rockers GHOST, who toured Australia recently with the Big Day Out, dropped by the Music Feeds studio in full clergymen attire to perform "Ritual", a cut from their debut full-length album, 2010's "Opus Eponymous"; "Year Zero", a song from their second full-length album, 2013's "Infestissumam"; and a cover of Roky Erickson's classic track "If You Have Ghosts". The latter song's progressive-rock undertones are emphasized by the strong vocals of GHOST frontman Papa Emeritus II, who dressed down slightly for the occasion. Check out the footage below.

GHOST's covers EP, "If You Have Ghost", sold around 5,000 copies in the United States in its first week of release to debut at position No. 87 on The Billboard 200 chart. Issued on November 19, 2013 via Loma Vista Recordings, the five-track EP was recorded and produced by Dave Grohl (FOO FIGHTERS, NIRVANA), and includes cover versions of songs by ROKY ERICKSON, ABBA, ARMY OF LOVERS and DEPECHE MODE, plus a live version of the GHOST offering "Secular Haze", recorded in Brooklyn earlier this year.

Outside North America (with the exception of Scandinavia), Spinefarm Records is the new releasing partner for Loma Vista on all GHOST recordings, including the new EP and previous album. Spinefarm releases are distributed through Caroline/Universal in all territories, including the U.K., where the EP was made available on November 18, 2013.