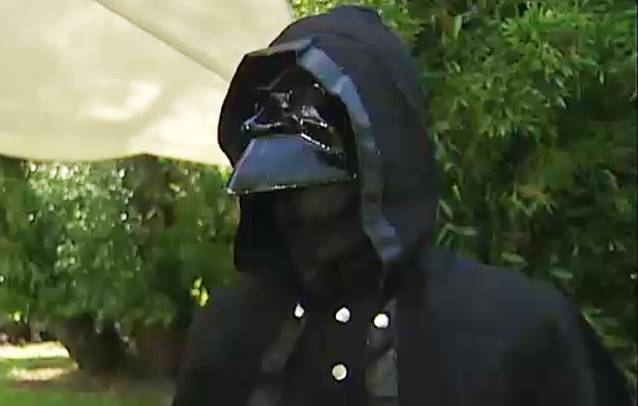 Swedish occult rockers GHOST are planning to enter the studio in the fall to begin recording their third album for a 2015 release. Asked by Andrew Haug of AndrewHaug.com, Australia's first-ever dedicated 24/7 rock and metal online radio station, if the next CD will — as has been suggested in recent interviews — be "more metallic" than the previous efforts, one of GHOST's Nameless Ghouls said (hear audio below): "What I've been trying to sort of make clear was that [2013's] 'Infestissumam' turned out to be quite a vocal record, which goes very well with the level of theatrics of our live show right now. Whereas in the future, when we plan to go even more elaborate when it comes to theatrics and live performances, we cannot really have Papa singing all the time, because a) that's not very good for dynamics; b) it's not very healthy to have a singer that sings all the time; and c) from an instrumentalist's point of view, as much as I like the current record, I think we wanna do a record that might be more instrumental and thus, with that saying that it might be more riff-based. But these are just general thoughts about this from our point of view. If it makes the record come out as more of a metal record or not, it's very hard to tell right now."

GHOST was honored with the P3 Guld award (for their criticially acclaimed "Infestissumam" release) from Swedish radio station P3 in the "Best Rock/Metal Album Of The Year" category. The winners were announced this past Saturday night (January 18) during a live awards ceremony broadcast from the Scandinavium in Gothenburg, Sweden.