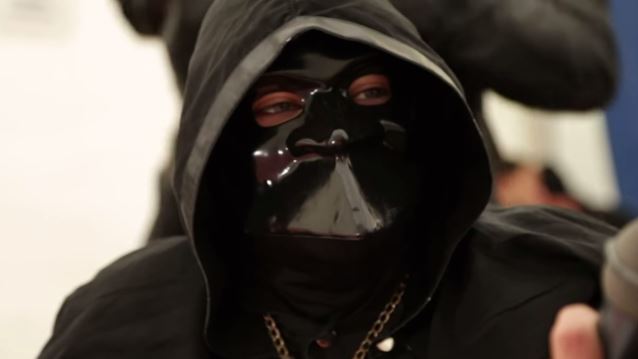 One of the Nameless Ghouls from Swedish occult rockers GHOST was recently interviewed on Chile's Radio Futuro. A couple of excerpts from the chat follow (transcribed by BLABBERMOUTH.NET).

On why there are so many quality bands coming out of Sweden:

"I get asked this every now and then, and I think that most Swedish bands do… I mean, there's no theory that originates from the idea of us having a lot of… Just because we have a very good social security system [in Sweden], which means that if you're an unemployed person, that doesn't mean that you automatically are thrown out in the street; you can still have an apartment, you can still have somewhat of a normal life, even though you don't have a job. That means that there are a lot of people that are young and might not have a job, and there's a lot of time to invest in being in a band. It's not a rich environment, but it still gives you the freedom of investing in your talent. But that is just one theory. I think that the other theory, which I also think goes hand in hand with that, is that ever since ABBA became big, and then in the '80s when we had both EUROPE and ROXETTE and bands like that, I think that there's a general… Even though not everybody is inspired to become those bands, I think that that opened up a lot of doors for a lot of people. And that is probably why it's so hard sometimes for bands from other countries to break out, because you normally don't hear from a lot of bands from this or that country. But if you have one band, there might as well be a second. And if you have two, there might as well be four. Because you open up the door out. So I think that a lot of it has to do with the bands of the past. But, from an underground point of view, [there were] very important bands from the '80s [coming out of Sweden], when we talk about metal, [which] are, obviously, BATHORY, CANDLEMASS, and when ENTOMBED created their first record with their sound, that obviously opened up a lot of doors for Swedish death metal bands, because all of a sudden, Swedish death metal was something that everybody thought of as qualitative. When you have that tag, being a metal band from a country where everybody expects everything from the country to be qualitative, obviously that means that you have a little advantage every time."

On the recent launch of a Change.org petition to get GHOST to break up:

"These petitions, I could not care less. It's completely, completely, just stupid. For us, it doesn't make a difference. There is no petition in the world that can make us change. I mean, why would we? For me, I didn't even know that you can petitions like that before this. So I was just laughing [when I first heard about it]. And then we went on to the next page of our lives. It's just laughable, because these people, don't they realize that the more you talk about us, the more we're gaining? And if they don't understand that, you cannot do anything but laugh at the whole thing."

On whether he has any comment on the recent release of a photo that appeared to show GHOST frontman Papa Emeritus II (believed to be Swedish musician Tobias Forge of MAGNA CARTA CARTEL, REPUGNANT and SUBVISION) without his trademark makeup posing backstage at a Dutch festival with BEHEMOTH's Adam "Nergal" Darski:

"Not really. I mean, for us, it didn't make a difference, because it's just an assumption anyway. We are friends with Adam and the [rest of BEHEMOTH], so we don't really have a comment."