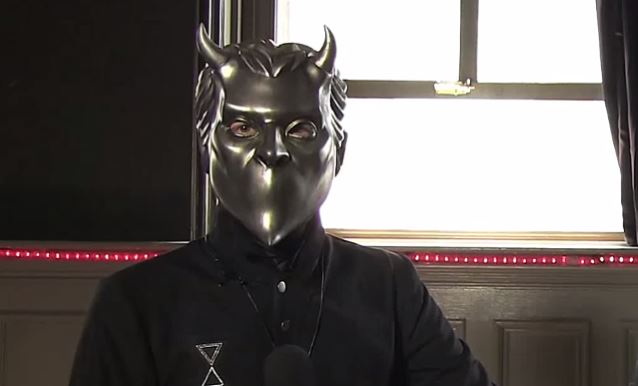 One of the nameless ghouls from GHOST says that he was not offended by SLAYER guitarist Kerry King's recent comments about the Swedish occult rock outfit, explaining that GHOST "is not for everybody."

In an interview with Artisan News, King stated about GHOST: "Dude, I love the imagery… I love it. I just hate the fucking music. I like them [as people]. You know, they've been on many tours with us. I just… I can't [get into their music]. And I tried. I wanna like 'em, and I can't. I got their CD from Brian Slagel from Metal Blade. It was when Gary Holt [EXODUS guitarist] first started playing with us, and I picked up Gary. And I'm, like, 'Brian said this is awesome, man.' So we put it in, going to practice. It wasn't awesome. It wasn't awesome for me. It wasn't awesome for [Gary] either. I'm, like, 'Well, maybe the first song sucks.' [Laughs] And we went to the next one. It's just not for me. I know GHOST is hugely popular, and I'm very happy for their popularity. And, like I said, [they're] the nicest guys you'll ever meet. It's just not my music. And I've tried so hard. [Laughs]"

Asked by Metal Injection what his response is to Kerry's comments, a nameless ghoul from GHOST said (see video below): "We've toured quite a lot with SLAYER, actually. So, I mean, we're mates… I don't even think that what he said was negative. He just said that he didn't like the band… or he didn't like the music."

He continued: "We're not for everybody. We've never tried to please everybody. So it's, like… I didn't even see the negative element in what he was saying… I mean, it doesn't change my opinion of SLAYER. I've been a SLAYER fan ever since I was a kid, and I still love several of their records with all my heart. For me, it wasn't changing anything."

King later said that the way the metal media covered his original comments about GHOST was overblown. He told DigBoston: "The problem with doing interviews is that whoever you're doing the interview with may or may not have bad intentions. They didn't see the part where I said they were wonderful dudes. I said I love the imagery. I tried to like their music, but it's just not my thing. Somehow that became 'Kerry King hates fucking GHOST.' Whatever I say is just taken out of context for the furthering of whatever crappy web site they write for."