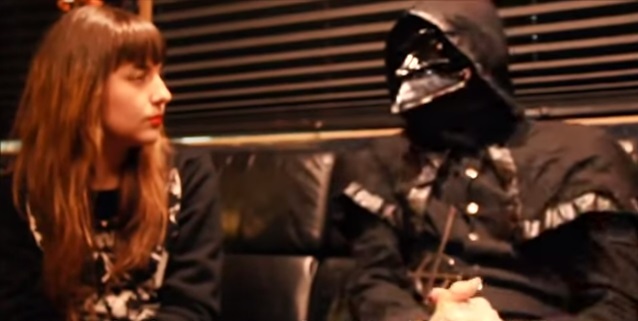 Ghost Colombia conducted an interview with A Nameless Ghoul from Swedish occult rockers GHOST during the band's recent North American tour. You can now watch the chat below.

Asked if GHOST could one day exist without the outfits and the theatrical stage show, the Nameless Ghoul said: "I don't think so. I am very comfortable with the idea of not potentially being anonymous, because, in many ways, we are not anymore. Every show there's 50 people outside our bus and we do informal meet-and-greets all the time, because we have to. We cannot… The laws of gravity… in the sense that we cannot play an enclosed arena where we can completely shy away from everybody, just hovering in a helicopter."

Speaking to Jägermeister at this month's Sonisphere festival in the U.K., one of the Nameless Ghouls from GHOST stated about the photo leak: "I mean, it's… We don't really know what to say about that except for we keep our identities as secret as we possibly can, of course, but at some point it's bound to happen, some things that are not really optimal for us, of course. But the identity part is always gonna be, for as long as can take it, it's gonna be a hassle in many ways, and I think we have managed to keep it below the radar, for the most part, at least."